Aftersun Movie Review: What Happens in the Movie Aftersun? 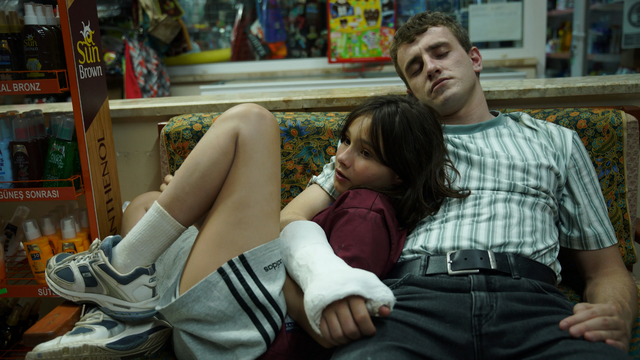 Twenty years ago, Sophie (Frankie Corio/Celia Rowlson-Hall) traveled to Turkey with her father, Calum (Paul Mescal). During their time at a resort, she recalls fond recollections of relaxing by the pool and going on several excursions.

However, Sophie begins to find the truth between her distinct memories and the exaggerated echoes that genuinely collided with her memory of the event.

Aftersun is a narrative about the point in every child’s life when they begin to perceive their parents as genuine, flawed individuals.

Sophie strives to discover more about Calum through the lens of camcorder footage of a vacation that was a crucial turning point in both of their lives.

Calum, a young father turning 31 in the novel Aftersun, serves as a focal point for an examination of time and aging.

In the meantime, eleven-year-old Sophie is increasingly intrigued about her father’s experiences at her age, but she thinks him to be an old man.

He is astonished to see himself in his 30s and unable to predict how he would be at age 40, but he does not necessarily disagree.

Their relationship is warm and affectionate, but Calum’s façade continues to crumble when his daughter asks him about his upbringing. Nevertheless, memory is not always as it appears.

Sophie’s mother is casually brought up in conversation, but the 11-year-old shows little interest in discussing their relationship. And it doesn’t matter.

Sophie’s recollection of a father-daughter relationship across time is the subject of Aftersun. Wells occasionally used a dark, strobe-lit room filled with bodies as an ever-present emblem of existence beyond time and space.

There is a coming-of-age narrative, however, it is not the primary focus. Their hotel serves as a type of playground for Sophie to explore herself since she naturally gravitates toward people older than herself.

She is unable to avoid seeing other holidaymakers kissing, which she witnesses. Calum acknowledges that she is at a key age and desires to maintain an open channel of communication with her.

He teaches her self-defense and meditation and informs her that her impulses and experiments are natural and healthy, but he does not wish to lose their closeness.

Wells and cameraman Gregory Oke employ a sun-drenched image that regularly emphasizes the locations of Sophie and Calum’s adventures.

There is a transition between camera video footage and classic cinema, establishing a format that visually complements the film’s examination of memory. Aftersun is a non-linear narrative that shifts between the past, present, and a universe that exists outside of our conception of time.

Wells has a keen eye behind the camera, capturing some of the most memorable images of the year. She regularly obscures Calum’s face, usually conveying Sophie’s story through shadows and reflections.

It is frequently obscure, much like distant memories. There is a shot of a Polaroid photograph developing in front of our eyes over a continuous shot that depicts this well. In addition, Wells supports her argument with some of the most imaginatively effective use of music licensing.

Aftersun is not an ordinary story. Rather, the focus is on remembrance and how we can never completely know our loved ones.

Occasionally, we fail to recognize the things that are most readily apparent. Even upon reexamination of our recollections, there is always something hidden beneath the surface that we can never know for certain.

Aftersun is a timeless classic that will endure the test of time. It is a film unlike any other, and it is certain to plant the germ of emotion within you, which will gradually grow. This is the year’s finest film.