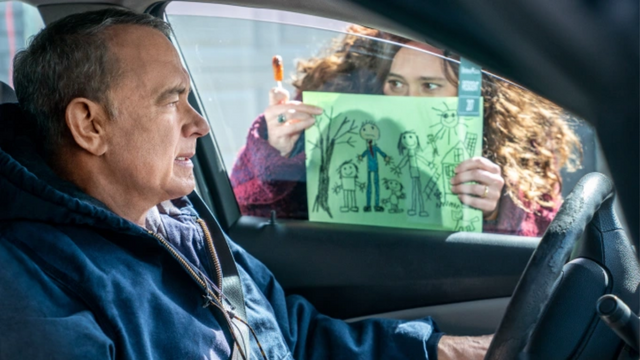 A Man Called Ove, a Swedish dramedy-heartwarmer based on the bestselling book by Fredrik Backman, first debuted even years ago. It was about a grouchy elderly widower who yells at everyone on his street, enforces the neighborhood watch-style parking and recycling laws, and continually attempts suicide.

These attempts are repeatedly thwarted when Ove witnesses a neighbor breaching a bylaw outside his house and can’t help but run outside to protest. But when a nerdy, nice-natured young couple decides to move in next door and insist on being friends with Ove, their artless friendship allows Ove to finally let go of his suppressed anguish and find redemption.

The role of Ove was originally performed by Rolf Lassgrd (Wallander on Swedish television), and in this Hollywood version by playwright David Magee and director Marc Forster, Ove is now played by Tom Hanks, renamed Otto. Mariana Trevino and Manuel Garcia-Rulfo portray the lovable, new neighbors.

Hanks’ portrayal accentuates and colors the original curmudgeon, and his star power ratchets up the drama and makes the narrative more understandable. However, because it’s Hanks, we never for a second think that he’ll be that nasty (or that miserable) for very long.

The endearing Hanks will undoubtedly return soon, and it does so as the sorrowful tale of his deceased wife is revealed in a poignant flashback.

However, she is always a lifeless cypher and never a compelling person. Otto will, of course, be the absolute cutest of all. He has a striking short haircut and an expressionless, open face. Gump rather than grumble.

The absurd attempts at suicide, however, pose the same shocking and perplexing tonal error as in the original, which is where the actual issues lie. Newspapers are severely constrained in what they may write about this; not so with film, which is (rightly) given creative latitude.

However, in the moments in which Hanks purchases the tools from a hardware store haggle with the manager over the alteration, and then humorously has to forsake his plan in order to reprimand someone… Being strangely emotional from the start, it’s not serious enough to do credit to the subject, dark enough for scabrous black humor, or witty enough for comedy of any kind.

The film otherwise stays very true to the original’s format, despite the fact that the gay adolescent boy Ove helped in the previous film is now trans. Hanks carries the movie thanks to his charisma and easy-going manner when speaking to the camera, yet this peculiar movie never fully comes to life.

Moments that were very important in the book, like when the local kids gave the hero a loving nickname, aren’t as important in the movie because they happen so quickly. When Hanks tries to smile at the beginning of Act Two, nothing feels earned.

Even worse, the emotionally closed-off Ove is given a lazy makeover by the screenwriters. To keep some of Backman’s great writing in the narration, Otto is no longer the quiet, serious type.

Instead, he’s a chatterbox who’s always ready to talk too much. In A Man Named Otto, nothing changes.

It’s basically a call-and-response as if the healing power of community happened overnight or the soul-crushing weight of grief could be shed as easily as a winter coat. A Man Called Otto is, to be honest, rude.

Forster doesn’t think his audience will like the story of a real jerk who finds a reason to live again. Maybe he doesn’t believe that American audiences will be able to sit through all of Ove’s heartbreak as a young man in order to see him shine as a senior.

Any way you look at it, Magee’s script makes Ove less of a jerk and more of a grump. Less is at stake. Side stories are cut out to save time or keep things light, but this makes the main story less interesting.

Even Otto’s favorite sparring partner, a pregnant, nosy immigrant (played by the energetic Mariana Treviso) who keeps pounding on the walls he’s built and his front door, gets a happy makeover. Lots of sugary smiles make up for her rough edges.