Editorials 24
HomeNewsThe New Sheriff of The County Will Be Robert Luna!
News

The New Sheriff of The County Will Be Robert Luna! 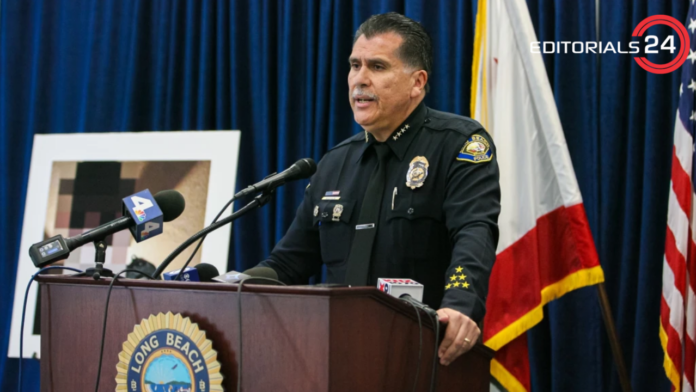 Previously ahead by a small margin, former Long Beach Police Chief Robert Luna now has a nearly 260,000-vote advantage over Los Angeles County Sheriff Alex Villanueva. The Los Angeles County Registrar-Recorder/County Clerk’s office provided updated election night totals on Saturday, and they showed Luna with roughly 59% of the vote and Villanueva with about 41%. A revised tally released on Saturday showed Luna with 867,704 votes to Villanueva’s 608,520.

According to election officials, the next update will be released on Monday between 4 and 5 p.m. In the meantime, we will continue to provide updates every other week on Tuesdays and Fridays until the final tally is in.

According to Luna’s Statement Released on Wednesday 9 November 2022 “The returns look good, and our campaign has a significant lead.” Moreover, I am confident that I will keep my lead in this race as more votes are counted in the coming days. The people of Los Angeles County elected me sheriff so that I could provide them with “new leadership, accountability, and effective strategies to reduce crime.”

Luna Hopes to Unseat the Current Sheriff, Which Would Be a Remarkable Achievement

When Villanueva beat incumbent Jim McDonnell four years ago, it was the first time in nearly a century that a sheriff had been defeated in a re-election bid in the county. Now, though, Villanueva is in Luna’s sights and could suffer the same fate.

However, the sheriff was confident that he would make up the difference from early voting as the vote count continued over the next week. In his words, “Let’s see what the vote says,” he said at his election night party in Monterey Park on Tuesday, according to KCAL9. “… People just want to see progress made on the issues that affect them directly, such as ending homelessness and decreasing violent crime.

Speaking to his supporters in Long Beach on Tuesday night, Luna acknowledged that the vote counting would take a long time but expressed optimism about the trend. A common theme that Luna has heard from the many people she has met across this great county is the desire for change.

He pledged to uphold “integrity” in the department and to be “accountable at the end of the day” as sheriff. They both ran vigorous campaigns, with Luna particularly attacking the incumbent for his allegedly sexy rapport with the county Board of Supervisors and his alleged blindness to the problem of gang activity among the department’s deputies.

Villanueva Has Brushed Off Such Criticism

Villanueva argues that his fights with the board prove he is a staunch defender of the department and its deputies and that he has taken great pains to attack and ban alleged deputy cliques within the agency.

When Villanueva was elected four years ago, he had significant support from reform-minded community groups and Democrats. Villanueva’s popularity among these communities has declined over the past four years due to his disagreements with the Democratically controlled Board of Supervisors regarding budget and policy issues.

He has also refused to enforce the county’s COVID-19 vaccination mandate among his deputies and department employees and has ignored multiple subpoenas to appear before the Civilian Oversight Commission.

Villanueva’s campaign claims the sheriff’s office has gained back the public’s trust because of his initiatives, such as the implementation of body cameras and the raising of the hiring standards for deputies. One of the campaign’s main claims is that the agency is “the most diverse in the nation.”

Sheriff Villanueva‘s campaign promises to “hold public officials accountable for their actions” and “compassionately clean up homeless encampments” if he is re-elected. During the campaign, Luna claimed that Villanueva is “mismanaging” the sheriff’s department and promised to do what he could to regain the public’s trust in the force. He also bragged about being an impartial third party with no prior ties to local law enforcement.

“Growing up in East Los Angeles, patrolled by the sheriff’s department, opened my eyes to examples of both good and bad policing,” Luna said in a candidate statement. Luna has pledged to “modernize” the sheriff’s office and jail system, as well as to work to ensure the psychological safety of his officers.