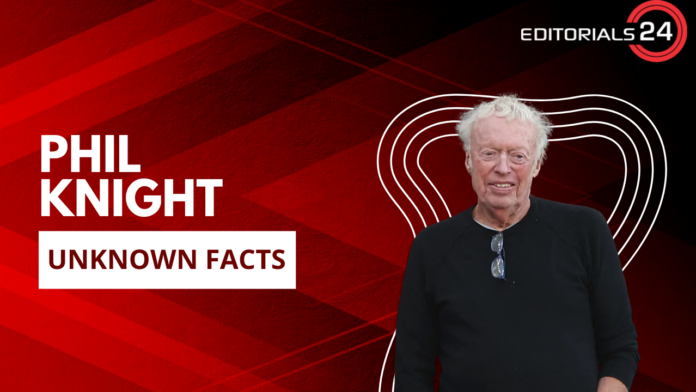 Born on February 24, 1938, Philip Hampson Knight is an American business mogul worth an estimated $1.2 billion. In addition to being the company’s co-founder and current chairman emeritus, he was also its former chairman and chief executive officer. On October 3, 2022, Knight’s estimated net worth was US$35.2 billion, placing him in the 27th spot on Forbes’ list of the world’s richest people.

Here Are Some Fun Tidbits About the American Business Mogul:

1. He helped start Nike Inc. and is now serving as the company’s Chairman Emeritus. Earlier in his career, he had held the positions of chairman and chief executive officer.

2. Blue Ribbon Sports, subsequently rebranded as Nike, was founded by Knight and his coach Bill Bowerman after they were inspired by the Tiger brand of running shoes made by the Onitsuka Co in Kobe, Japan.

3. On January 25, 1964, Knight and Bowerman founded the company BRS by simply shaking hands and agreeing to work together in exchange for Knight providing funding and Bowerman providing product designs.

4. Matthew Knight Arena, home of the University of Oregon basketball team, was built in 2010 thanks to a partnership between Knight and former Oregon Athletic Director Pat Kilkenny, who together raised $100 million to establish the “Athletic Legacy Fund.”

5. On February 24, 1938, in Portland, Oregon, Philip Hampson “Buck” Knight was born to Bill Knight and Lota (Hatfield) Knight. His father practiced law and then founded a newspaper.

6. He attended Cleveland High School and grew up in Portland’s Eastmoreland district. Since his father insisted that he find work on his own, he had to apply at the Oregonian, a competitor of the family newspaper.

7. After serving for a year in the Army, he returned to school to earn an MBA from Stanford Graduate School of Business in 1962.

8. A business class assignment inspired him to start selling running shoes: “Can Japanese Sports Shoes Do to German Sports Shoes What Japanese Cameras Did to German Cameras?”

9. Because of his admiration for the excellence of Tiger running shoes, in November 1962, Knight met with Mr. Onitsuka to negotiate the acquisition of western United States distribution rights for the Tiger brand.

10. The original Blue Ribbon Sports were sold out of a green Plymouth Valiant at track meets in the Pacific Northwest, where they quickly became a legend.

11. Prior to founding Blue Ribbon Sports, he worked as a CPA for both Coopers & Lybrand and Price Waterhouse. Additionally, he taught accounting at Portland State University. In 1969, nevertheless, he stopped working as an accountant and dedicated himself totally to BRS.

12. Graphic design student Carolyn Davidson created the iconic swoosh emblem for Nike at a cost of only US $35 in 1971 when the company was renamed. Even though Knight hated the logo, rumors have it that he compensated Davidson with Nike shares in September 1983.

13. With the help of Nike officials, he bought a 15 percent investment in Will Vinton Studios in the late ’90s and eventually took over the board of directors.

14. While Will Vinton resigned from the board in 2003, Knight filled the vacancy by appointing his son Travis Knight. The company is now known as Laika. In 2009, he elevated Travis to the positions of CEO and President of Laika.

16. One in a string of big donations to universities, Knight pledged $500 million in the fall of 2016 to construct a new three-building laboratory and research science complex at the University of Oregon.

17. Knight married Penelope “Penny” Parks on September 13, 1968, after meeting her while working at Portland State University. The couple has a property in La Quinta, California.

18. In October 2008, Knight and his wife contributed US$100 million to the OHSU Cancer Institute, the largest gift in Oregon Health & Science University’s history, and the institute was subsequently renamed the “OHSU Knight Cancer Institute” in their honor. In 2016, it was revealed that Knight had given $400 million to launch the Knight-Hennessy Scholars program for postgraduates.