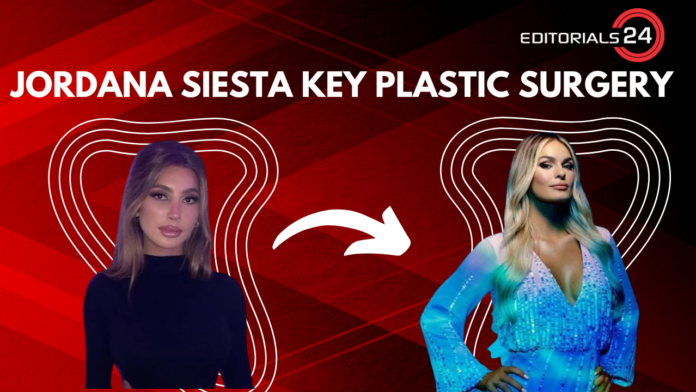 Ever since her introduction to the Siesta Key audience, Jordana Barnes has become an increasingly prominent character. At first, she was Sam Logan’s friend and ex-lover, and her provocative behavior caused tension between Sam and Juliette Porter. After causing trouble with Juliette and Sam, Jordana turned her attention to Brandon Gomes, causing problems between herself and Camilla Cattaneo, who had previously been seeing Gomes.

Because of the relationships, she’s developed with other cast members including her new best friend Cara Geswelli, it appears like Jordana has been given a larger part on the show recently.

Since the beginning of the season, Jordana and Sam have been stirring up trouble behind the scenes by airing their grievances about Juliette and the manner in which her breakup with Sam unfolded. Jordana has followed Sam to his new home in Miami, but she insists they are not dating.

Jordana has not only relocated to a new home but has also unveiled a new look after undergoing plastic surgery.

The way Jordana carries herself and her romantic connections on Siesta Key give the impression that she is self-assured. However, she ultimately decided to get plastic surgery, and she proudly displayed the results of her nose operation.

On her Instagram stories, she showed off her bandaged nose. She said, “I’d like to see my nose already,” as the post’s caption.

She went on to write that her nose was “still pretty swollen” in her following update. In addition, she cautioned her detractors to “remember that before sending [her] anything harsh through message.” There’s a chance that after seeing that Jordana had completed work and voiced disagreeable ideas, some people reached out to her.

The Actress Jordana Barnes Discusses Getting a Nose Operation

This was part of a lengthy post in which she said, “I don’t like messages telling me how perfect my nose was already, my face my choice isn’t that cool?” I’ve been wanting to do this since I was 16 years old, and at age 30 I finally worked up the nerve to do it. She continued by saying that in addition to changing her nose’s appearance, she also wanted to address breathing issues.

She said, “I’m thrilled about my decision and will continue to share my journey with you guys, but bear in mind that telling someone they didn’t need something after they made the decision to do it isn’t it.”Jordana finished her outburst by thanking her supporters and expressing her excitement to finally unveil the results once she’s fully recovered.

After a recent encounter with a critic who mocked her nose, Jordana has finally shown the results of her rhinoplasty. One of her posts was targeted by a troll who subsequently called her out for having a “big gnocher.”

Jordana posted the photo to her Instagram stories with a humorous aside, clearly unfazed by the whole ordeal. This exchange between Jordana and her critic. Already before the trolls started making fun of her, Jordana had made it plain that she intended to get a nose job. Jordana says she will keep her followers updated on her progress and will reveal the results once her nose has healed and the bandage has been removed.

What Is Jordana Barnes’s Estimated Net Worth?

As of February 2022, Jordana Barnes reportedly had a net worth of more than $400,000. She is a professional artist who specializes in TV prints and pictures of celebrities but had no formal art training. (This clarifies the spending of $10,000 by her co-star Sam on the painting.

Since May 2017, when she went out on her own, Jordana has been pursuing a career as an artist. When asked about her schooling, all we were told was that she had attended Booker High and graduated in 2010. So you know, she did her first filming experience last year on Siesta Key. On the other hand, she was still not included in the reality show’s cast on IMDB.

How to Correct a Volume-Level Issue with One Air Pod?