Editorials 24
HomeCelebrityJade Cargill, a Professional Wrestler, The Facts that Surprised You!
Celebrity 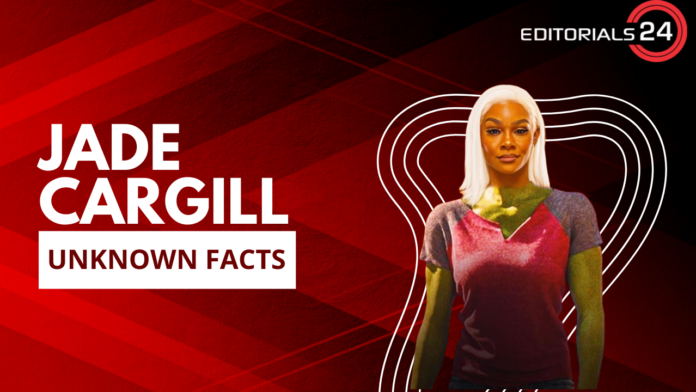 The American professional wrestler Jade Cargill (born June 3, 1992) is currently in her maiden reign as the AEW TBS Champion for her promotion, All Elite Wrestling (AEW). It’s not often that a wrestler is able to maintain a low profile in their personal life, but Jade has, and as a result, the first-ever TBS Champion has a lot of secrets. The interesting facts about Jade Cargill are listed below:

1. As a High School and University Student, Jade Was an Avid Basketball Player

But Jade didn’t stop there; she also kept up her basketball career while attending classes at Jacksonville University. She was named the most valuable player and freshman of the year during her first year of college. She had enough early success with basketball to feel confident about playing during her entire collegiate career.

The Atlantic Sun Preseason First Team included Cargill by her senior year. With all of Jade Cargill’s basketball accomplishments throughout high school and college, it was only fitting that she makes her professional wrestling debut opposite Shaquille O’Neal, a member of the NBA Hall of Fame.

Being a professional wrestler makes it difficult for Jade Cargill to maintain privacy in her personal life. It’s challenging enough without having to deal with Brandon Phillips, a former Major League Baseball player, as a partner. Throughout his Major League Baseball career, Phillips has played for several different organizations, but he is best recognized for his time as the Reds’ second baseman (2006-2016). It’s been over five years since Cargill and Phillips started dating.

Bailey Quinn is Phillips’s and Cargill’s daughter. Bailey appeared on AEW’s “Dynamite” after Jade won the TBS Championship, which is when they were both last seen together. A TV Insider interview with Jade revealed her thoughts on having her kid there for her huge championship win: “She encouraged me and we collaborated on promotional materials.

Having my kid there reminds me why I’m making the effort to be healthy and active: I’m here for the next generation.” Jade went on to explain that she hopes her daughter will feel confident enough to enter a competitive field like professional wrestling in the future, and that she is open to the possibility of her daughter pursuing wrestling as a career.

3. Mark Henry Served as Jade’s Mentor, and Heath Slater Was Her Trainer

Jade Cargill decided that a career in child psychology wasn’t for her after getting advice from Mark Henry and former WWE wrestler Heath Slater and instead decided to pursue a career in professional wrestling. Getting your foot in the door of professional wrestling can be challenging, but Mark Henry suggested that Jade visit the Face 2 Face Wrestling School, which is run by Richard Borger and Slater.

Jade mentioned that Slater came in to help her train a couple of times in an episode of the “AEW Unrestricted” podcast. Training for AEW was not Jade Cargill’s primary focus during her brief stint at the Face 2 Face wrestling school. The training she received at the Nightmare Factory and with Heath and Henry more than made up for the brief time she spent at Face 2 Face in preparation for her AEW roster debut.

4. Forgoing a Deal with WWE, Jade Instead Chose to Pursue Other Opportunities

Wrestlers had to decide in 2019 if they would be better served by AEW or WWE. The answer seemed obvious to Jade Cargill. The WWE gave Jade a chance, and she went on “Talk is Jericho” to talk about it. At first, WWE was skeptical of her dedication to the business, she said. Jade noted on the show that despite the fact that she was wealthy and therefore didn’t need wrestling, she still participated in the sport out of pure enjoyment.

Wrestling with the Wolves interpreted this as a lack of commitment to the WWE brand. WWE still offered her a contract despite her reservations, but there was still one more thing that was holding Jade back.

Jade should have known something was up when they questioned her extensively about her daughter. WWE has doubts about Jade’s ability to balance motherhood with her wrestling career. Jade provided WWE with several options, including having a nanny watch her daughter around the clock and having her partner take care of her.

Cargill felt untrustworthy from the get-go, and it wasn’t just her imagination. When asked why she signed with AEW, Jade said, “It put my mind at ease over the choice I was considering. There was no need for me to uproot my life; I already felt at home where I was.” Naturally, WWE was disappointed by Jade’s decision, but she believes she did what was best for her and her family.

5. Jade’s Ring Outfit Is Modeled After Storm’s from X-Men

In the climactic match of AEW’s “Dynamite,” Jade Cargill, disguised as Storm from the X-Men, competed for the TBS Championship. Wearing a white cloak and wrestling outfit reminiscent of the Wind Rider, Jade defeated Ruby Soho to become the first-ever TBS Champion. Fans of both comics and wrestling got a kick out of this getup, but it wasn’t all a one-night-only thing. Every time Jade appears on AEW, she sports the trademark white hair of Storm.

On an edition of the “AEW Unrestricted” podcast, Jade discussed the inspiration for her Storm-themed outfit with host Aubrey Edwards. Jade said that her pals had suggested it “To paraphrase, “You know, you look like a Storm. If you haven’t already, I highly recommend giving it a shot. Which means that Storm is common knowledge.

How could it be that nobody recognizes Storm? So I said, “All right,” gave it a shot, and ended up loving it.” Since her AEW debut, Jade’s appearance has played a significant role in developing her persona. She made an appearance at the All Out 2022 pay-per-view dressed as She-Hulk.

How to Install Team Viewer After Downloading It.!

Changing Siri’s Voice on Your IPhone: The Steps You Need to Take..!