Editorials 24
HomeTechnologyWhat to Do if The iPhone's Flashlight Isn't Functioning?
Technology

What to Do if The iPhone’s Flashlight Isn’t Functioning? 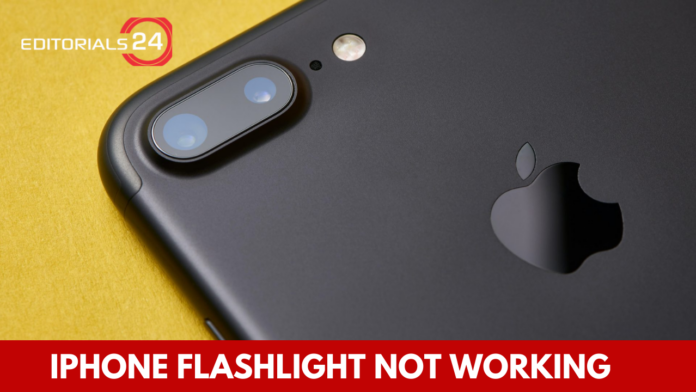 One of the rarest complaints was that tapping the iPhone’s flashlight didn’t do anything. Being a fundamental function of the iPhone, the flashlight icon may be accessed on the locked screen, allowing you to activate the rear LED without first unlocking the device.

The inability of your iPhone’s flashlight to function could be due to a relatively simple problem that can be remedied by performing some fundamental troubleshooting steps. Alternatively, the issue could be hardware-related, specifically with the LED.

The Most Typical Roots of iPhone Flashlight Problems

Even if you manage to resolve the issue at hand, you should still investigate its root causes to ensure that it does not recur in the future. That being said, here are a few of the most typical explanations for why your iPhone’s flashlight isn’t functioning:

It’s conceivable that the issue is caused by one or more of the apps installed on your cellphone; these programs may be blocking the device’s flashlight from activating when it’s most needed. If this is indeed the case, then dismissing the apps that use the flashlight should solve the issue.

Even a minor system glitch can have serious consequences, such as the inaccessibility of a portion of the system’s functionality. Perhaps that’s what’s happening here. Restarting your device is usually all that’s needed to fix any hiccups in the system.

You have a low battery on your iPhone, which means that the flashlight or torch will not turn on. As a result, it’s essential to charge your gadget on a regular basis, even though its battery life is still rather secure.

You may be on the verge of iPhone overheating if, after capturing 4K video for several minutes, you notice that your device is noticeably warmer than usual. Even if you haven’t received an overheating warning, your device’s flashlight likely won’t turn on if it’s too hot.

Due to problems with certain services, your iPhone may not function as intended, and essential functions like the flashlight may be disabled. You should probably eliminate this as a potential explanation.

Read More: How Can You Set up Paramount Plus on The Ps4 and Watch It?

You should check that the LED is on before doing any other troubleshooting. To take a picture, simply activate the flash by tapping the iPhone’s camera app. If the LED blinks, then it is functional.

Now you know it’s not hardware related, at least. So keep with the troubleshooting till the flashlight is back in working order.

Second Option: Perform a Hard Restart of Your iPhone

The following step is to eliminate the chance that a technical issue is to blame for the issue. Forcing a restart, which is analogous to pulling the battery, will accomplish this.

Specifically, Here Is What You Do:

Third Option: The iPhone Cool Down and Then Be Recharged

Read More: How to Fix “No Location Found” on An iPhone?

If after attempting the aforementioned steps, the camera flash still doesn’t activate when you hit the flashlight symbol, the next step is to reset all settings.

This will return all services to their original settings without erasing any of your data.

Adam Levine Weight Loss: Know About His Weight Transformation in 2022!