Editorials 24
HomeTechnologyThe Best Tutorial on How to Crop a Screenshot on A Mac!
Technology 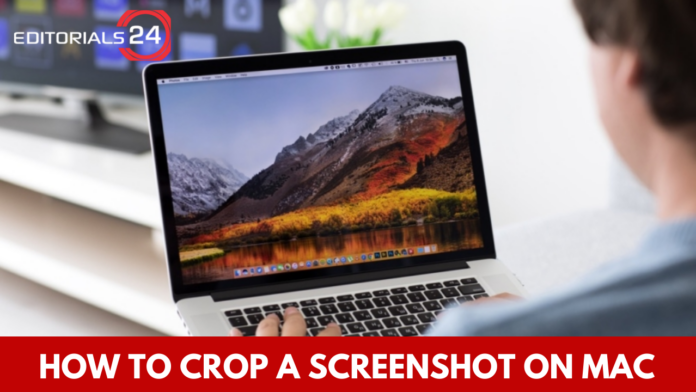 Cropping a screenshot on a Mac is useful if you want to capture an image from an app but remove unwanted elements like the menu bar or dock. There is an abundance of ways to capture screenshots on a Mac, from built-in tools to third-party apps that can be purchased or downloaded for free.

You can use these techniques to get rid of extraneous background elements, apply filters for a more polished look, or make other sophisticated adjustments. How to crop a screenshot on a Mac.

If you don’t know how to take a new screenshot, you won’t be able to crop an existing one. Taking a screenshot on a Mac can be done in several ways, but the quickest way is to use one of several keyboard shortcuts. In macOS Mojave and later, there is an in-built cropping tool for screenshots.

You can use these keyboard shortcuts to snap screenshots if you’re not sure how:

Read More: How to Fix “No Location Found” on An iPhone?

If you need to crop a screenshot on a Mac, I recommend using the new in-built cropping tool.

In macOS, a floating thumbnail appears in the lower right corner of the display right after a screenshot is taken. It’s a mini version of the screenshot you just took, and selecting it will activate the cropping tool. The thumbnail will disappear after a few seconds if you don’t click on it, rendering the tool useless. The time remaining before it disappears cannot be prolonged, unfortunately.

Select the Area You Want to Crop:

When working with images in macOS, double-clicking will launch Preview. With this program, you can easily trim the edges of your screenshots.

In Order to Modify Screenshots in The Photos App:

Read More: What to Do if The iPhone’s Flashlight Isn’t Functioning?