Some Amazing Facts About the Musician Chris Stapleton! 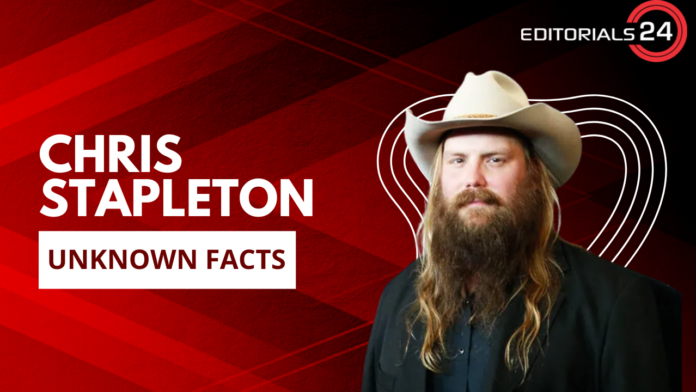 American singer, songwriter, guitarist, and record producer Christopher Alvin Stapleton was born on April 15, 1978. His childhood home was in Staffordsville, Kentucky, but he was born in nearby Lexington. When Stapleton first went to Nashville, Tennessee in 2001, he intended to major in engineering at Vanderbilt University. However, he ultimately decided to pursue a career in music instead. Following that, Stapleton inked a deal with Sea Gayle Music to have his songs written and published by the label.

Stapleton has almost 170 songs to his name as a writer or co-writer as of 2018. A total of six country songs he co-wrote reached number one: Kenny Chesney’s five-week number one “Never Wanted Nothing More,” Josh Turner’s “Your Man,” George Strait’s “Love’s Gonna Make It Alright,” and Luke Bryan’s “Drink a Beer.”

Here are some facts below:

1. He’s Been with Morgane Stapleton, His Wife, for A Decade

Chris and his wife first crossed paths 14 years ago while they were both employed by the same music publishing company. They told The Washington Post that their first date was when Chris requested Morgane to write a song with him. “We didn’t get much writing done that night,” Morgane, who now frequently performs in harmony with him, said.

2. The Words “You Are My Sunshine” Are Inscribed on His Wedding Band

Morgane allegedly had the lyrics to a song he frequently performs at concerts engraved into his wedding band in a secret ceremony before the two wed in 2007.

3. In Nashville, He Signed a Publishing Contract

Even Stapleton recognises that this is an unprecedented feat. Saying, “That is not anybody’s tale, but that’s mine,” he shared his experience on CBS’s Sunday Morning. A former employee of Papa John’s Pizza, he stores his employee badge there even though he no longer works for the company.

In 2013, he commented, “Every time I open my medicine cabinet, I see it as a reminder that I worked a lot of different things to be doing what I’m doing now.”

4. He Already Has Two Children and Will Soon Have Four!

Chris and Morgane, whose identities they have chosen to conceal, are the doting parents of two children, a boy and a girl, and are expecting another set of twins. Chris thinks that he and Justin Timberlake share many common experiences as fathers. We speak about being dads and daily life and we talk about music a lot,” Stapleton told Billboard in 2015.

5. He Hasn’t Lost Touch with His Heritage

According to People magazine, in 2016, Chris gave a concert and donated $57,000 worth of musical instruments to his high school alma mater, Johnson Central High School in Kentucky, as part of the ACM Lifting Lives programme.

Chris graduated at the top of his Johnson Central High School class, and he spent one-year studying engineering at Vanderbilt University in 1996 before he dropped out.

7. The Number of Honours He Won Is Staggering

Chris has won a total of sixteen Country Music Association (CMA) awards and seven Academy of Country Music (ACM) awards. He has won nine ASCAP Country honours, including the Vanguard Award, for his compositions.

Making The Cut Season 3 Confirmed Release Date, Trailer & Everything We Know in 2022!