Interesting Things You Should Know About the UFC Heavyweight Champion Cain Velasquez! 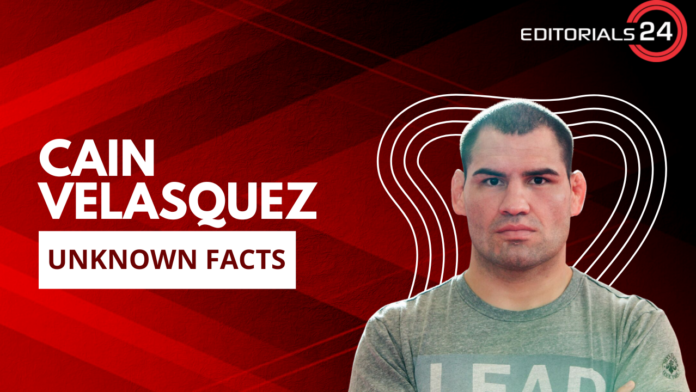 Ca Ramirez Velásquez (born July 28, 1982) is a retired MMA fighter and professional wrestler in the United States who currently performs for Lucha Libre AAA Worldwide (AAA). Because of his success in the Ultimate Fighting Championship (UFC), where he fought in the heavyweight division and won the title twice, he has gained widespread recognition.

Velasquez left the MMA industry for good this year. In the same year, Velasquez began his professional wrestling career, initially for the AAA promotion in Mexico, which specializes in Lucha Libre, and later for the WWE promotion in the United States. After the COVID-19 outbreak forced the WWE to make changes to their budget in April 2020, he was released from his contract.

Even though Cain Velasquez has signed on to be a WWE Superstar and his fighting prowess is well-known, there are still many secrets about the company’s newest star that fans don’t know.

1. His First Time Inside the Ring

Cain Velasquez may have spent most of his time since signing with UFC doing mixed martial arts (MMA) activities, but that doesn’t negate his prior expertise in the wrestling industry.

Both WWE and AEW were eager to get Velasquez because of his stellar performance in a six-man tag team match with Cody Rhodes while with AAA. After being signed by WWE, clips of Velasquez performing with a mask were posted online, and it’s safe to say that he appears like a promising prospect right off the bat.

Cain Velasquez has a tattoo on his breast that reads “Brown Pride” in a style reminiscent of Rey Mysterio’s Mexico tattoo on his stomach, so it should be easy to identify him.

Cain has shown his Mexican pride throughout his WWE career, and the Mexican flag design part of this tattoo is a physical manifestation of that pride. He has said that he got the tattoo to let people know that he is Mexican and that he never anticipated being an athlete because he had never seen a large Mexican participate in sports before.

Like many other combat sports professionals, Cain Velasquez got his start working as a bar and club bouncer to fund his training. To further stretch his budget, Velasquez used to sleep in his car. Despite not getting the best sleep, he was always ready to go to the gym first thing in the morning.

Even though Velasquez isn’t the kind of person you want to cross, several other WWE Superstars have dabbled in the bouncing world in the past, like Batista and Sheamus.

4. He Is a Full-Time Trainee

Cain Velasquez may have had some prior wrestling experience in Mexico, but he is far from being a polished pro. Still, it doesn’t mean he isn’t working to hone his abilities. Cain has admitted that Velasquez is making every effort to learn and grow in the WWE, dispelling any notion that Velasquez would expect to be handed anything he wants just because of his UFC success.

It has been reported that the MMA icon would be training in the WWE Performance Center in an effort to prove to both the company’s brass and the fans that he deserves to be a Superstar in the WWE.

We’ve already mentioned that WWE wasn’t the only major wrestling promotion interested in signing Cain Velasquez; after all, he was the most sought-after free agent just a few weeks ago.

It’s no surprise that All Elite Wrestling wanted to sign him, given his prominence in the UFC and his stellar track record in the ring. Afterward, AAA’s Cody Rhodes gushed about his partner Cain, who he paired with in the match “I’ll be keeping a close eye on him for sure. If and when Cain decides to join us for a game of baseball, you may view this as a side project for me. Count me in.

6. He Has Experience Wrestling at The Amateur Level

Cain Velazquez’s decision to join wrestling isn’t something out of the blue or for no reason; he has a long relationship with the sport that the organization may choose to highlight in the future.

Although Velasquez is best known for his success in mixed martial arts, he also has a strong background in amateur wrestling, which contributed to his outstanding ground game in the UFC. He was a two-time All-American as a Division I wrestler at Arizona State University, where he reached the fifth-best national ranking of his career.