Here Are Some Things About Blake Martinez! 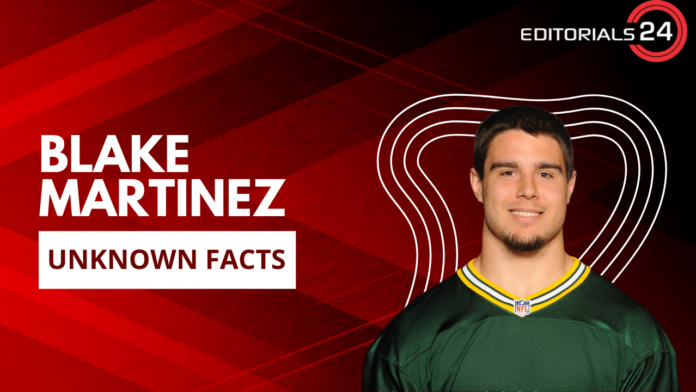 U.S. ex-NFL inside linebacker Blake Edmon Martinez was born on January 9, 1994. (NFL). After graduating from Canyon del Oro High School in Oro Valley, Arizona, he used a scholarship to enroll at Stanford University. A two-year starter at linebacker for the Cardinal, he earned first-team All-Pac-12 honors in 2015. In the 2016 NFL Draft, the Green Bay Packers took him in the fourth round.

1. Martinez, a Mexican-American, was born to Mexican parents Marc and Carrisa in Tucson, Arizona. He went to high school in Oro Valley at Canyon del Oro, where he played on the football team as a tight end, running back, and linebacker for Dustin Peace.

2. Martinez, who was drafted in the fourth round in 2016 and has started all 50 games for the Packers in both the regular season and the playoffs, has a 6-2 frame and 237 pounds. He has started 57 of his 61 career regular season games played for Martinez. In his four years, he’s only missed three games, all of them his first year.

3. With 522, Martinez has made nearly nine tackles per game throughout the course of his career. In addition, he has 10 sacks, 29 tackles for loss, 17 pass deflections, 12 quarterback hits, 2 forced fumbles, and 2 fumble recoveries in his career. He’s made 24 tackles in 5 postseason games (3 starts).

4. In the three seasons since his 2016 debut, Martinez has made 441 tackles, more than any other NFL player. Twenty-four of his 61 games included ten or more tackles made by him.

5. For the 2019 season, he was second in the NFL with 155 tackles and played a key role in Green Bay’s 13-3 record and a trip to the NFC title game. The game against Oakland on October 20 was the eighth game in which Martinez recorded double-digit tackles; he finished with a season-high 16 tackles (eight solos). His stat line also included one interception, one forced fumble, and two passes defended.

6. In his college career at Stanford, where he earned the nickname “Machinez,” he recorded 257 tackles (137 solos), 13.5 tackles for loss, 6.5 sacks, five interceptions, and five forced fumbles. He also played in 51 games. For the rest of his college career, Martinez was a starter in every game. Over his four years with the Cardinal, he contributed to their three Pacific-12 championships and seven straight bowl appearances. While attending Stanford for his master’s in management science and engineering, he played in three Rose Bowls, two of which the Cardinal won.

7. Martinez tore his ACL in Week 3 and was put on season-ending injured reserve on September 29, 2021. Martinez’s release was effective as of September 1, 2022.

8. The eight-year-old Martinez inked a deal with the Las Vegas Raiders on October 4, 2022, first joining the team’s practice squad and then moving up to the active roster three days later.

9. He played professionally for seven years before Martinez announced his retirement on November 10, 2022.

Best Sites to Watch Free Movies Instead of Openload..!