The 7 Most Interesting Facts About Michael Jordan- A Professional Basketball Player! 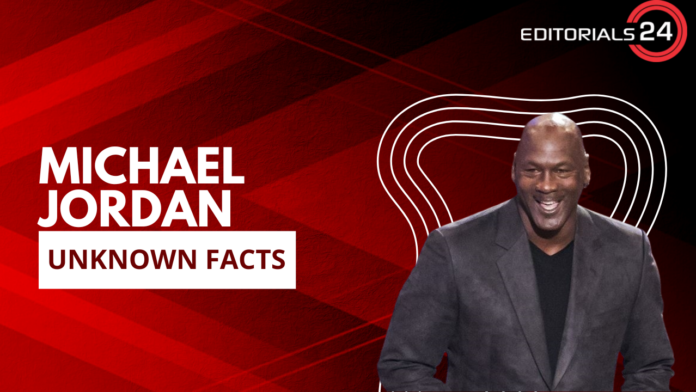 He spent fifteen years as a professional basketball player, winning six titles with the Chicago Bulls. As the majority owner and chairman of both the NBA’s Charlotte Hornets and NASCAR’s 23XI Racing, Jordan is deeply involved in both sports. With his help, the NBA gained international attention in the ’80s and ’90s, and he became a cultural icon on a global scale.

Debates about who the best ever was should center on how they performed under pressure. When comparing Michael Jordan to Kobe Bryant and LeBron James, the two players to whom he is most often compared, it is clear that the Bulls legend excelled at a higher level in the Finals.

Jordan played in and won six NBA Finals in his 15 years in the league, playing a total of 35 games. Over the course of those 35 games, he scored 33.6 PPG on average and never fewer than 22. Kobe has played in seven games, winning five of them while averaging 25.3% from the field and 25.3 PPG. James has made 10 appearances and won 4 times, averaging 28.4 PPG in the process.

Sure, you need to dig a little deeper than the numbers and the context, but no player has ever responded to adversity as Jordan has.

2. He Holds the League Record with Ten Scoring Titles

It’s common knowledge that Michael Jordan can put points on the board. He had an exceptional post-up game for a guard and could blow by them for dunks or layups in traffic, shoot from deep, pull up for a midrange jumper, and dunk from anywhere on the court.

Consequently, defenders had to decide how best to deal with him, as he was likely to score at least some points in most games.

Jordan won a record 10 scoring titles in his 15 years in the NBA. In addition, he accomplished this feat seven times in a row from 1986 to 1993, joining Wilt Chamberlain as the only other player to do so. Furthermore, Jordan was the scoring champion each year that the Bulls won the championship.

3. Only One Among Athletes Has Reached the Billion-Dollar Mark

“His Airness” is not only the best basketball player of all time and one of the most heavily promoted athletes in history; he is also a successful businessman and a recognized name around the world.

His annual earnings are mind-boggling, and they come from all sorts of sources: the Air Jordan line, his partnership with Nike, his owning of a car dealership and several restaurants, and his continued success as an endorser, where he still earns more than current NBA stars.

After increasing his stake in the Charlotte Hornets in 2014, he became the only billionaire athlete, per Forbes, and serves as both the team’s principal owner and chairman.

Although he has joined an elite group of athletes, he is not the first to do so; Tiger Woods was named the first in 2009, two months before his cheating scandal. The result was that Woods lost a lot of his sponsors and was no longer considered a billionaire.

4. He Is Afraid of Water

You might assume that Michael Jordan, with all that he has accomplished in his life, is no longer susceptible to fear. Jordan has consistently shown his mettle when called upon to do something of significance. Although he shows no signs of nervousness on the court, he is still human and is familiar with the experience of fear in everyday life.

Because of a traumatic event that occurred when he was young, Jordan is terrified of the ocean. The death of a close friend at the hands of the undertow left him with lasting trauma.

Jordan developed a fear of water after nearly drowning at baseball camp not long after. He’s gotten over it to an extent, but he still gets the jitters whenever he’s on a small boat or near large bodies of water.

Michael Jordan and his wife Juanita Vanoy have been together for 17 years and are the proud parents of three children: Jeffrey, Marcus, and Jasmine. They split up in 2002, got back together for a while, and finally got divorced in 2006.

Divorce was agreed upon by both parties and was amicable. The $168 million they reportedly paid to end their marriage was the largest ever paid out in a celebrity divorce.

Number 23 was a special jersey for Jordan. At all stages of his basketball career, from high school to college to the Chicago Bulls, he wore jersey number 23. He wore a different number for one game only while playing for them.

Before a game on Valentine’s Day in 1990, a thief swiped his jersey from the locker room. The replica jersey a fan had purchased for Jordan was too small for him to wear. The team’s equipment manager dug up a spare jersey with no player’s name on it. He finished the night ranked 12th but still managed to score 49 points.

7. His Salary from His First Year with The Wizards Was Donated to The 9/11 Relief Effort

The fact that Jordan came out of retirement (again) to sign with the Washington Wizards is something that many NBA fans would rather not think about. It would have been ideal for him to retire after the 1998 Finals, but his return did a lot of good for basketball, the United States, and the world.

Shortly after the September 11 attacks, he declared his return and said that his entire salary for the first year would be given to aid efforts. There was a total of $1,000,000 donated, with $900,000 going to aid organizations and $100,000 going to children who had lost both parents.

Despite Michael Jordan’s injury-plagued season, his return brought much-needed good vibes to the sporting world, and he showed that he was still one of the best players in the league by averaging 22.9 points per game while also averaging 5.2 assists and 1.9 steals per game for the Washington Wizards (1.42 SPG).