The 10 Most Interesting Facts About Martin Luther King Jr. 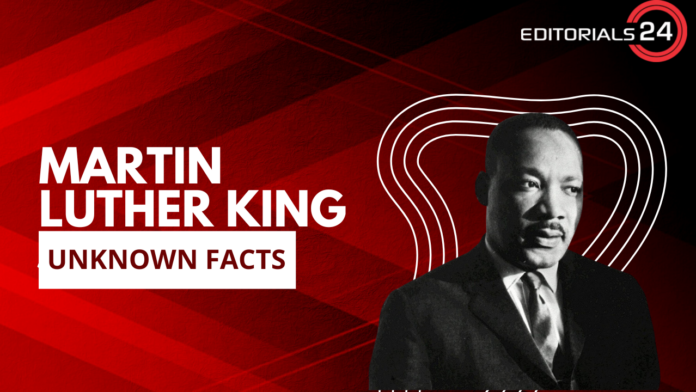 King, the son of a prominent civil rights activist and minister, used nonviolence and civil disobedience to push for equality for people of colour in the United States. He organised targeted nonviolent resistance to Jim Crow laws and other forms of discrimination, drawing inspiration from his Christian faith and the nonviolent activism of Mahatma Gandhi.

Dr King was an active participant and leader in marches for voting rights, desegregation, worker rights, and other civil liberties. He was in charge during the Montgomery bus boycott in 1955 and went on to be the first president of the Southern Christian Leadership Conference (SCLC).

He led the SCLC during its unsuccessful Albany Movement in Albany, Georgia, and he helped organise some of the nonviolent 1963 protests in Birmingham, Alabama. As one of the march’s organisers, King gave his famous “I Have a Dream” speech on the Lincoln Memorial steps in 1963.

His many accomplishments as an activist, minister, theologian, and philosopher don’t overshadow the fact that billiards was a hobby he greatly enjoyed. It was while attending graduate school at Crozer Theological Seminary in Chester, Pennsylvania (now known as the Colgate Rochester Crozer Divinity School in Rochester, New York), that King first learned to play pool and continue playing it for the rest of his life.

2. He Made History by Becoming the Honour of Time’s Person of The Year

The January 1964 issue of Time magazine, published after King’s March on Washington for Jobs and Freedom, named him “Man of the Year” for 1963. This distinction was bestowed upon no other African American until he arrived. This was his second time being featured on Time’s front page. When he led the Montgomery bus boycott in 1957, he made the cover.

3. The Nobel Peace Prize He Won Made Him the Youngest Recipient Ever

For his “nonviolent struggle for civil rights for the Afro-American population,” King was awarded the Nobel Peace Prize in 1964, becoming the youngest person ever to do so at the age of 35. He planned to donate the cash award of $54,123 to the Southern Christian Leadership Conference so that they could use it to further the civil rights movement.

Read More: Frida Kahlo: These 8 Facts About Her Are Relatively Unknown.!

4. A Number of His Songs Were Released on Motown

There are few more legendary musicians than King who have worked with Motown Records. The Detroit speech was recorded by Motown and released as an album in August 1963 titled The Great March To Freedom.

A generous deal for an album that retailed for $1.80, the label offered King a 40-cents-per-copy royalty and a $400 advance. The Southern Christian Leadership Conference is the recipient of King’s insistence that all royalties be donated to the organisation. Motown founder Berry Gordy gave $500 to the SCLC, and his label’s artists frequently performed at its benefit concerts.

5. He Was Grammys Award Winner

We Shall Overcome (The March On Washington…August 28, 1963) was nominated for a Grammy in the Best Documentary, Spoken Word, or Drama Recording category in 1964, and King took home the award (Other Than Comedy). In 1971, he won a Grammy for the posthumous release of his spoken word piece “Why I Oppose the War in Vietnam.”

6. A Minimum of Twenty Honorary Degrees Were Bestowed upon Him After His Passing.

In 1965, Reverend Dr Martin Luther King Jr. addressed the student body at Howard University. In addition to his three undergraduate degrees, Dr King received honorary degrees from Howard University, Bard College, Yale, Wesleyan, and many other universities around the world, as reported by Washington State University.

7. The Writings of American Essayist Henry David Thoreau Had a Significant Impact on His Pursuit of Civil Rights

Dr King found encouragement in the writings of Henry David Thoreau. AP
Dr King read constantly for the better part of his life. Socrates, Rousseau, and Aristotle were among his favourite authors, as reported by Atlanta Black Star.

Although many great works had an impact on him, Henry David Thoreau’s “Civil Disobedience” essay stands out as particularly formative.

Dr King’s autobiography cites Thoreau as a major influence on his view of the world, particularly Thoreau’s insistence that an individual should not cooperate with an evil system. Furthermore, it gave him confidence in his own ability to bring about positive change in the world.

8. Over the Phone Is Where He First Met His Future Wife

Martin Luther King Jr. and his wife, Coretta Scott King, had their first conversation over the phone. AP

Dr King often complained to his friends at Boston University about his inability to find a woman he truly liked. Then he called up his pal Mary Powell, who suggested he meet Coretta Scott.

The two spoke for the first time over the phone and decided to set up a face-to-face meeting. Scott, who aspired to become a concert singer, was enrolled at the time at The New England Conservatory of Music studying opera.

She was a mezzo-soprano, and I’m sure she would have gone on into this area if a Baptist preacher hadn’t interrupted her life, Dr King recalled in his autobiography.

9. His Second Family in Boston

Speaking before a joint session of the Massachusetts Legislature in Boston, Dr. Martin Luther King Jr. is pictured in the centre. AP

Dr King reportedly considered Boston to be his “second home” because he spent so much of his young adult life there. Throughout the rest of his life, he made multiple trips back to the New England metropolis.

10. During His Lifetime, He Published Six Books

His autobiography was published as one of his works. Amazon Books in his oeuvre such as “Stride Toward Freedom,” “Where Do We Go From Here,” and “Why We Can’t-Wait” trace the development of civil rights movements in the United States.