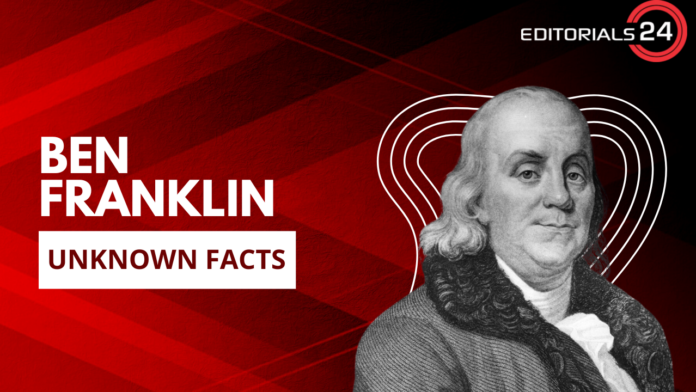 In addition to his many other accomplishments, American polymath Benjamin Franklin FRS FRSA FRSE (January 17, 1706, O.S. January 6, 1706 – April 17, 1790) was a prominent figure in the fields of literature, science, politics, and industry. Franklin was not only one of the Founding Fathers of the United States but also the first Postmaster General and one of the foremost minds of his era.

Because of his work with electricity and his charting and naming of the current still called the Gulf Stream, he is considered a seminal figure in the history of physics and the American Enlightenment.

To name just a few of his inventions, he is credited with the lightning rod, bifocals, and the Franklin stove. He established numerous public institutions, such as the Library Company, the first fire department in Philadelphia, and the University of Pennsylvania.

Franklin was known as “The First American” due to his tireless advocacy for early colonial unity, his prolific writing, and his role as a representative in London for multiple colonies.

1. The One and Only Non-President

Many people get their facts wrong and think Benjamin Franklin was the nation’s first president. Frankly, Franklin never served as president, in contrast to his contemporaries Washington, Jefferson, and Adams. He was the first U.S. ambassador to France and Sweden and served as governor of Pennsylvania.

The American founding father Ben Franklin is often depicted in historical artwork. He was asked to pose so often by artists that he eventually wrote, “I am perfectly sick of it.” The Philadelphia Museum of Art, which houses at least 150 images of Ben, has the largest collection of any institution in the world. However, the one shown above can be found in New York’s Metropolitan Museum of Art.

In a word, Ben’s marital status was convoluted. Is it true that Deborah Read laughed when she saw him come down the street with two loaves of bread in his hands, fresh off the boat from Boston? True. When he was 17, he moved in with Deborah and her widowed mother, and the two teenagers quickly fell in love.

But he left for Europe, and Deborah wed another man; when she discovered that he was already married, she tried to get a divorce; however, he vanished. Ben then had a child, but not with Deborah. Despite the fact that the couple was never physically together for the vast majority of their common-law marriage, it lasted for a long time.

5. Oh La La! The Adventures of an American in Paris

Ben became known throughout France as a real ladies’ man during his time there. Really, what kind of girl wouldn’t want to date a proto-nerd like that?

Below, you can see Franklin relaxing on the riverbank while reading Mon Cher Papa: Franklin and the Ladies of Paris (1966), in which Claude-Anne Lopez writes about Franklin’s many affairs and how he saw women “not merely as objects of desire, but as people with a different outlook, with their own contributions.”

6. Getting to Bed and Getting up Early

In his Poor Richard’s Almanac, Franklin famously wrote, “Early to bed, early to rise makes a man healthy, wealthy, and wise.” Franklin is also credited with inventing bifocals, establishing the first successful lending library, and proposing ideas to increase the money supply to stimulate the economy. Concepts from his pamphlet “A Modest Enquiry into the Nature and Necessity of a Paper Currency” are still in use today. All international central banks, including the Federal Reserve.

7. In 1768 He Invented His Own Phonetic Alphabet

Franklin’s alphabet was created to “have a more natural order” than the standard English alphabet by putting more emphasis on spelling words in accordance with their sounds and the amount of effort put into pronouncing them. We likely wouldn’t have the letters C, J, Q, W, X, and Y if Franklin’s alphabet had been adopted (which it wasn’t), as Franklin found them to be confusing and redundant.

8. He Was Honored with A Spot in Swimming’s Highest Hall of Fame

Franklin swam from Chelsea to Blackfriars, a distance of about 3.5 miles, on the Thames River in 1726, as reported by the International Swimming Hall of Fame.

A lifelong swimming instructor and proponent, he frequently pushed for the inclusion of swimming in the curriculum of schools. Therefore, Franklin was inducted into the Hall of Fame in 1968, after his death.

9. A Woman Named “Mrs. Silence Dogood” Was His Alias

At the age of 16, Franklin began publishing under the pen name Dogood in the Courant, a newspaper owned by his older brother James Franklin. The essays, which covered topics like “the pride of apparel” and “religious hypocrisy,” were a huge hit in Boston at the time.

James was aware that “Mrs. Silence Dogood” was a pen name, but he had no idea that his younger brother was the one actually writing the entries. Apparently, this news made him very upset and drove a wedge between him and his brother.

Respectable associates! Unfortunately, that wasn’t actually his birthday. His actual birthday was January 6, 1706; however, due to a calendar shift instituted by the monarchy in 1752 (in which September 2nd was replaced by September 14th), his official celebration date was moved to a later date.