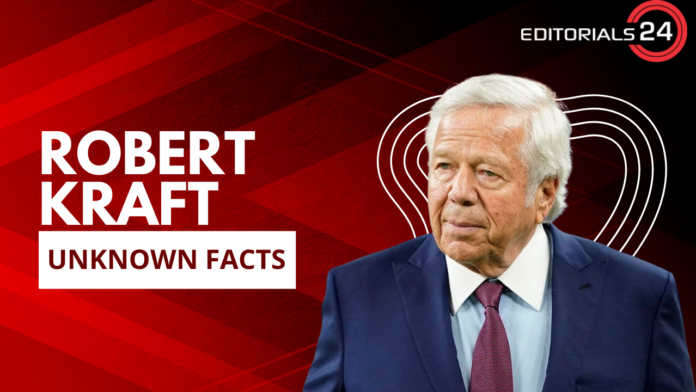 The American business mogul Robert Kenneth Kraft was born on June 5, 1941. He heads up the Kraft Group, a conglomerate with interests in paper and packaging, professional sports, real estate development, and private equity, and serves as the company’s chairman and chief executive officer (CEO). He has owned the New England Patriots of the NFL since 1994. (NFL).

Kraft also founded the Major League Soccer (MLS) team the New England Revolution in 1996 and the esports team the Boston Uprising in 2017. In 2022, his wealth will have increased to $10.6 billion.

Continue reading if you’re interested in learning more about the prosperous businessman.

1. Father Had Intended for Him to Become a Rabbi

Robert Kraft’s parents, garment manufacturer Harry Kraft and lay leader at Congregation Kehillath Israel Sarah Bryna, had their first child there in Brookline, Massachusetts. The Kraft family had strong religious beliefs, and Kraft Sr. had always hoped his son would study to become a rabbi. When Kraft was a kid, he had to give up playing sports after school to study Hebrew. Although he never got to show off his athletic prowess, he was the senior class president at Brookline High and a straight-A student.

2. At College, He Found the Woman Who Would Become His Wife

Following his graduation from Brookline High School, Kraft enrolled at Columbia University, where he became a member of the Zeta Beta Tau Fraternity and played football for the school’s freshmen and lightweight squads. Kraft met his future wife, Myra Hiatt, at a Columbia delicatessen where the two quickly developed romantic feelings for one another and went on to marry the following year, the same year Kraft graduated from Columbia. Their marriage flourished until Myra’s untimely death from ovarian cancer in 2011.

3. He Was so Interested in Politics that He Almost Entered the Field

At the age of 27, Kraft almost gave up his successful business career to pursue a political career. After being elected as the leader of the Newton Democratic City Committee, he pondered challenging Phillip J. Philbin in the Congressional election. He decided against it in the end, noting the toll on his young family that a political career would inevitably take, as well as the suicide of his friend and fellow State representative, H. James, Jr.

4. He Is Quite Receptive to Criticism and Suggestions

To be open to counsel, even if it comes from unexpected quarters, is something that Kraft attributes heavily to his success. When I was in charge of a manufacturing facility, I often worked late into the night, and I still recall the nighttime cleaning crew. “Tony,” Kraft recalled to Mass Live.

They used to hire him to sweep the floors and the bathroom because he only had one tooth. Even though he was not academically gifted, he was nevertheless a very bright individual. Not only that, but I’d also confide in him about my issues. In addition, he provided sound counsel that I found useful. That way, you can pick up useful information from everyone. As long as they have good morals, everyone is welcome in our family.

5. Long Before He Was the Team’s Owner, He Was a Die-Hard Patriots Supporter

Even before he bought the Patriots, Kraft was a devoted supporter of the team. Season ticket holder since 1971, Kraft persevered for a decade through numerous obstacles to finally buy the team.

6. He Initiated the 1996 New England Revolution

Kraft’s sphere of influence in sports grew in 1996 when he established the New England Revolution as a founding member of Major League Soccer. After waiting two years, he added the San Jose Clash to his portfolio. Although he briefly entertained the idea of investing in Liverpool, an English Premier League football club, in the early 2000s, he finally opted against doing so out of worry about the lack of a salary ceiling in UK football teams.

Yet, it seems that concern didn’t extend to the world of e-sports, because in 2017, Kraft invested in the Boston Uprising, one of seven teams in the professional Overwatch League.

7. He Has Contributed to Health Care Through Donations

The Boston-based non-profit hospital and physicians’ network Partners Health Care received $20 million from Kraft in 2011, continuing his philanthropic efforts from the previous year. The donation supported the Kraft Family National Center for Leadership and Training in Community Health, an organization with the goal of expanding people’s opportunities to receive medical care in the greater Boston area.

A van for the Kraft Center for Community Health at Massachusetts General Hospital was funded by him 6 years later, showing his continued dedication to the health of Boston’s inhabitants. As part of a fleet providing primary care to opioid addicts in Boston, this van makes regular rounds across the city.

8. He Is the Father of Four Boys

Since the passing of his wife, Myra, Kraft has become the father of four sons. Each son has taken after his father and achieved a position of prominence in one of his many businesses. Jonathan Kraft, the eldest son, currently holds the presidency of both the Kraft Group and the New England Patriots. Whereas Joshua serves as CEO of the Boys & Girls Clubs of Boston and Daniel is president of International Forest Products. David, the eldest son, left the Kraft Group to become a director.

How to Setup and Use the Cinehub Android App?