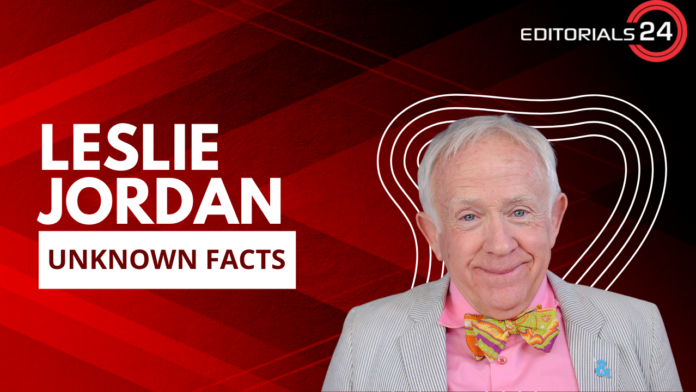 Leslie Allen Jordan was an American actor, comedian, writer, and singer who was born on April 29, 1955, and died on October 24, 2022. He first portrayed Earl “Brother Boy” Ingram in the 1996 theatrical adaptation of Sordid Lives, and then again in the 2000 film adaptation. The Primetime Emmy Award for Outstanding Guest Actor in a Comedy Series was given to him in 2006 for his roles as Beverley Leslie on Will & Grace (2001-2020) and Lonnie Garr on Hearts Afire (1993-1995).

Jordan played a number of major roles in the American Horror Story series (2013-2019), and he also starred as Sid on The Cool Kids (2018-2019) and Phil on Call Me Kat (2021–2022). The year 2020 saw the release of Jordan’s autobiography, How Y’all Doing?, which he began writing during the COVID-19 epidemic and became an Instagram contributor throughout. He gained 5.8 million followers.

In this article, you will discover interesting facts about Leslie Jordan that you probably didn’t know.

1. He Joked Around to Distract Himself from Bullies

Growing up is challenging for anyone, but when you’re different from most of your peers, the cruelty of children can make things more trying. A young Leslie once told Peach ATL, “I was hilarious as a kid largely to keep the bullies at bay.” Dodgeball games always ended with chants of “smear the queer;” I figured if I could just make them laugh, they’d leave me alone.

2. He Had More than A Dozen Baptisms

Leslie Jordan is a product of a staunchly southern Christian upbringing. A total of fourteen times, he told Philly Magazine, “I was baptized. In response to the preacher’s repeated calls to “Come forward, sinners!” I’d be like, “Oooh, I was out in the woods with that boy, I should go forward.” My mom always believed I was exaggerating. And each time she told me, “Leslie, you’re already saved,” I’d respond, “Well, I don’t think it took.”

3. Having More than A Hundred Acting Credits to His Name

Leslie’s acting career has been outstanding, but younger audiences might not know that. When you get down to it, he’s been entertaining audiences long before social media existed. Leslie has been in approximately 130 films and television shows since he first appeared on screen in 1986.

4. He Shared a Cell with Robert Downey Jr.

Leslie spent a brief period of time behind bars due to his numerous legal troubles in the late 1990s. Another actor, Robert Downey Jr., was also arrested during this time. Leslie was leaving when he was informed that he was giving up his bed so that Robert might have one.

5. He Competed as A Jockey

Leslie’s childhood hobby was riding, and his diminutive frame made him well-suited for a career as a jockey. Until he was about 27 years old, he was a jockey. At some point, he succumbed to the lure of the stage and resolved to make a living as an actor.

Although it is common knowledge that Leslie has become something of a social media celebrity in the wake of the pandemic, few people know just how successful his various channels have been. He has amassed roughly five million Instagram followers just during the outbreak. There are currently around 5.5 million of his online fans who follow him.

7. He Got His Start in The Industry Doing Commercials

In the entertainment business, ads are often the starting point for newcomers. Leslie relocated to Los Angeles from Tennessee and quickly found employment in the industry, appearing in commercials for well-known companies like Doritos.

Read More: Here Are Some Surprising Facts About George Washington that You Probably Didn’t Know!

There’s no denying Leslie is a natural in front of the camera, but he’s also dabbled in other aspects of production. There are three writing credits listed on his IMDB page, with two of them coming from the plays Lost in the Pershing Point Hotel and Rockabilly Baby.