Know These Surprising Facts About Keanu Reeves- The Canadian Actor! 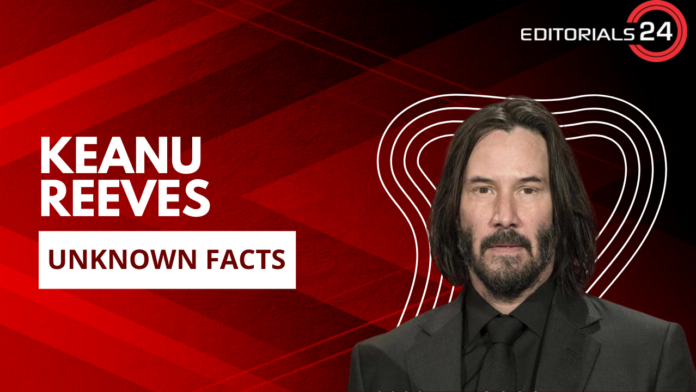 From his early dramatic turns in films like River’s Edge (1986) to action thrillers like Speed (1994), The Matrix (1999), and John Wick (2014), and his unforgettable performance as Theodore “Ted” Logan in the Bill & Ted franchise, Keanu Reeves has been a mainstay in Hollywood since the 1980s.

Find out about the actor’s background and the reasons he thinks he was sentenced to a decade in “movie jail” below.

Reeves’ mother Patricia married her second husband while he was still an infant, and the family relocated from Beirut, Lebanon to Sydney, Australia, New York City, and (ultimately) Toronto. Reeves was born on September 2, 1964.

2. As A Child, He Kept Himself Occupied with Hockey

While living in Toronto, Reeves fell under the sport’s spell. He was a member of the varsity hockey team and co-coached the club team. Reeves was in Windsor, Ontario, to attend tryouts for the Windsor Spitfires of the Ontario Hockey League.

Because Reeves saw a brighter future for himself in show business, he declined. After that, in the 1986 film Youngblood, he starred alongside Patrick Swayze and Rob Lowe as a professional hockey player.

3. The Role of Keanu Reeves in The Film Speed Catapulted His Career to New Heights

The lead role in “Speed,” which he landed in 1994, was a watershed moment in Reeves’ career. This massive success catapulted his career to new heights, allowing him to be pickier about the projects he takes on.

Speed’s director saw Reeves in Point Break and cast him as the lead, but he wasn’t the first choice; other actors in the 90s, including Stephen Baldwin, Tom Cruise, Tom Hanks, Wesley Snipes, and Woody Harrelson, were all considered for the role.

Speed, an action film released in 1994, catapulted Reeves to superstardom. The movie was a critical and commercial success, earning two Academy Awards and grossing $350.5 million worldwide and in the United States.

He has since cheerfully accepted supporting roles and even cameos in some experimental films.

Keanu Reeves said the script for “Speed 2” made him pass on the role. While on “The Graham Norton Show,” Reeves stated that he didn’t “respond” to the writing. He went on to say that everyone can relate to that “kind of feeling” when something is off.

In 1991, the musicians who would become known as Dogstar formed. By 2002, they had split up. Small Fecal Matter was the band’s original name before it was shortened to BFS, which stands for “Big Fucking Shit / Sound,” and then to its current moniker, Dogstar.

Besides acting, Keanu was the bassist for the band Dogstar. Their relationship lasted from 1991 until 2002. They have shared stages with Bon Jovi, Rancid, and Weezer, among others, and toured extensively across the Americas and Asia.

The American alternative rock band Dogstar existed from the mid-1990s to the early 2000s. The band only had moderate success, but they got a lot of attention because Keanu Reeves was their bassist.

Rob Mailhouse has parted ways with the group. Because of his curiosity about different beats, he eventually joined a band called Becky, in which he played bass until offers came in for the role of The Matrix.

5. He Was Thinking About Changing His Name to “Chuck Spadina”

Some casting directors in Los Angeles were reluctant to call in Reeves for auditions in the 1980s because his first name, which means “cool breeze over the mountains,” was difficult to pronounce and came off as too exotic.

Reeves began using “K.C.” to overcome this obstacle. Replace them with names like “Page Templeton III,” “Chuck Spadina,” and “Reeves.” The fact that Reeves always went to auditions under his real name led him to give up the practice.

6. Reeves Is Passionate About Motorcycles

While on location in Germany for a film, Keanu Reeves learned to ride a motorcycle for the first time. The 1973 Norton Commando is his favorite motorcycle. Along with starting a custom motorcycle dealership in California, he also helped found Arch Motorcycle Company.