Editorials 24
HomeCelebrityHere Are Some Surprising Facts About George Washington that You Probably Didn't...
CelebrityEntertainment 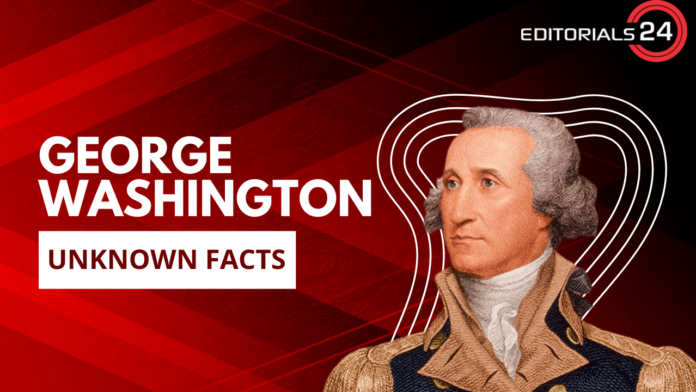 The United States’ first president was George Washington. During the American Revolution, he was the leader of the Continental Army to victory over the British. He is also credited with helping to create the United States Constitution.

In order to better himself as a soldier, farmer, and president, he read widely, maintained correspondence with authors and friends in the Americas and Europe, and participated in intellectual discussions that contributed to the agricultural, social, and political revolutions of his time.

2. The American Revolution Was Twice Saved by Washington’s Courageous Deeds

By the end of 1776, after suffering a string of crushing defeats in New York and New Jersey, the Continental Army and the patriot cause looked doomed. When other generals would have fled to warmer quarters for the winter, Gen. Washington had something very different in mind.

Three consecutive battlefield victories and a stunning strategic reversal boosted American morale and saved the new nation after his daring counterstroke across the ice-choked Delaware River on December 25, 1776.

Early in 1781, with the Revolution again on the verge of defeat, Washington set out on a perilous march south to surround and attack Lord Cornwallis’ British army at Yorktown, Virginia. The battle of Yorktown, won by Washington in October 1781, was the turning point in the war.

Read More: 25 Facts That Are Fascinating About Serena Williams…!

3. Washington Worked in The Bourbon Industry

Washington’s estate manager in 1797 suggested she start a distillery at Mount Vernon. By the time Washington passed away in 1799, the distillery was producing nearly 11,000 gallons of whiskey annually, making it the largest in America. Using the original recipe, the distillery produces a small batch annually.

4. Washington Was a Landowner of Over 50,000 Acres and An Enthusiastic Supporter of Westward Expansion

George Washington has been called the wealthiest president in U.S. history by some accounts. In addition to his holdings in Maryland, Pennsylvania, New York, Kentucky, and the Ohio Valley, Washington also owned over 50,000 acres in the western regions of Virginia and what is now West Virginia.

The idea of expanding the United States westward had been on Washington’s mind long before Lewis and Clark set out on their expedition. He saw the potential for the new territory to strengthen the country and bring its citizens closer together.

To facilitate the future flow of produce from the Ohio Valley to Atlantic ports, Washington envisioned a continental transportation system that would connect the headwaters of west-flowing Ohio with the east-flowing Potomac.

Even Washington’s decision to have the nation’s capital built on the eastern bank of the Potomac River was intended to emphasize the importance of the west in the minds of early Americans.

5. Washington Was the First to Sign the United States Constitution

George Washington saw the Articles of Confederation’s severe flaws in action during the American Revolution.

Washington went to Philadelphia in 1787 to take part in a convention called to propose amendments to the Confederation. He presided over the Constitutional Convention for its full four months after being selected unanimously.

Though he didn’t contribute much to the convention’s discourse, few delegates were more intent on crafting a government with genuine muscle and authority than he was. Furthermore, Washington was the first to sign this governing document because of his position as convention president.

6. Only President Washington Freed All of His Slaves

At the age of 11, George Washington inherited his first slaves from his family. Washington’s views on slavery evolved over the course of his life, particularly after he fought for freedom in the American Revolution.

As required by law, his estate provided for the care of former Mount Vernon slaves for decades after his death. In his will, he provided for the freedom of his slaves upon the death of his wife around 123. Unlike every other president who owned slaves, Washington eventually set his slaves free.

The exact number of letters he wrote is unknown, but educated guesses place it between 18,000 and 20,000. Between fifty and fifty-five years would pass if you wrote a letter every day.

8 His Teeth Were Not Made of Wood

But he did have some dental issues. Inauguration day was the first time he had only one tooth left in his head. As time went on, he went through several sets of false teeth. Ivory, brass, horse teeth, and even human teeth (possibly from slaves) were used in their construction.