Editorials 24
HomeCelebrityThese Are 8 Cool Facts About Brett Lee that You Must Know...
CelebrityEntertainment 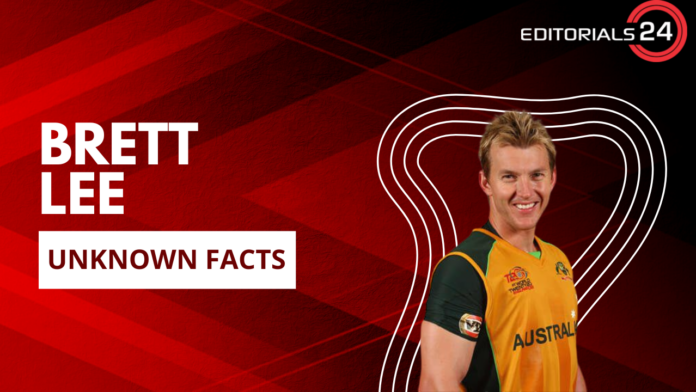 Brett Lee, one of the fastest bowlers of all time, dominated international cricket till his final game. When Jeff Thomson was out of the picture, Lee was the one tasked with frightening the batters with his lightning-fast pace.

After 13 years (1999-2012) of international competition for Australia, The Flash finished with almost 650 wickets to his name. In order to dismiss the finest batsmen, he relied on his precision bouncers and Yorkers. Brett Lee has some intriguing background information that may please his ardent followers.

Brett Lee once said in an interview that he had always been one to establish objectives for himself and that he felt accomplished having accomplished those goals on the international stage. It was in the 2003 World Cup that he achieved both of his goals—reaching 160 kilometres per hour and scoring a hat trick.

Lee was notorious for his roughness on the cricket field, but off it, he was a kind and caring person. The speed demon was actively involved in a number of charitable organisations, and he formed the band Six and Out specifically to raise money for the poor.

Among the organisations that have benefited from Lee’s generosity are the Adventist Development and Relief Agency (ADRA), the Make-a-Wish Foundation, and the Salvation Army.

Read More: Who Is Logan Paul? Here Are 5 Interesting Facts About the Social Media Icon!

Lee’s huge fame in India has led to him landing a role in the Bollywood film UNindian, in addition to his prior cameo performance in the film Victory. Preity Zinta, a Bollywood actress, has been mentioned in rumours as a possible love interest. But in 2015’s UNindian, he will have his first starring feature role.

Lee has almost the same fervour for music as he has for cricket. The song “You’re the one for me,” which he recorded with the famous Indian artist Asha Bhosale, became a huge hit in both India and South Africa, and he has been involved in other musical acts besides “six and out.”

Brett Lee’s stellar play in the 1999–2000 season earned him the first-ever Don Bradman Young Player of the Year award. He played in seven games and took 42 wickets, the most ever by an Australian bowler in a similar amount of games.

In the 2003 World Cup, Brett Lee and the Australian squad were unstoppable, defeating every opponent they faced with ease. Lee finished second on the list of players with the most wickets in the event with 22. Against the Kenyans in a best-of-six tournament, he scored a hat trick that proved to be devastating.

Even after his World Cup success, Brett Lee’s performance against the Indians was below par. Lee returned for the final two Tests after missing the first two. Even though he took 8 wickets, the Indian batting lineup still had a good time. A second setback exacerbated his ankle problem, and he was dropped from the Test squad that year. He remained sidelined for over a year.

In 2005-06, after he had experimented with his bowling style a bit, Lee was able to get back to his old ways. After an average Ashes series that made headlines for its intensity, he had a strong showing against the South African visitors, taking 13 wickets in three games.