The Man Behind The Myth: Things You Didn’t Know About Abraham Lincoln! 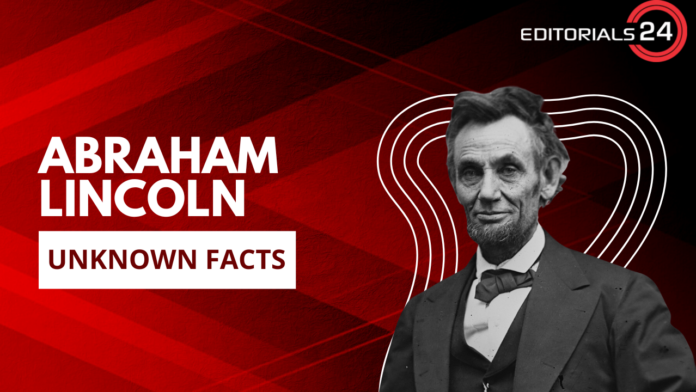 President of the United States from 1861 until his assassination in 1865, Abraham Lincoln was the 16th president. The American Civil War was largely won thanks to his leadership, and he is now considered one of the greatest presidents in the country’s history.

It’s easy to find interesting anecdotes and tales to tell about Lincoln, who is widely regarded as one of the most intriguing figures in U.S. history. Today, we’ll look at ten lesser-known but nonetheless fascinating details about Abe Lincoln.

1. Lincoln’s Emancipation Proclamation Was an Attempt to Put an End to Slavery

Abraham Lincoln’s proclamation of emancipation from slavery was issued on January 1, 1863. As stated in the proclamation, all slaves in the Confederate States of America were released from their servitude.

There is no doubt that the Emancipation Proclamation changed the course of the American Civil War. It was instrumental in bringing the North and South closer together, and it inspired many African Americans to enlist in the Union army.

The end of slavery in the United States owed much to the momentum generated by the proclamation. As a landmark in the fight for universal human rights, the Emancipation Proclamation was instrumental in freeing slaves in the United States. It’s a sign of how far humanity has come and how much further it can go in the future.

Lincoln’s birth is just one of many fascinating aspects of his life. Lincoln was the first president to be born in a state that was not one of the original 13 Colonies. He was born in Kentucky on February 12, 1809.

When he was younger, he got involved in some very unpresidential pursuits. Lincoln was quite the wrestler. Lincoln wrestled for twelve years and only lost one of three hundred matches.

Even though he was president during the Civil War, he had a sense of humour that was not typical of such a serious figure. A young Abraham Lincoln enjoyed playing pranks on his stepmother, a habit he carried into his presidency.

Lincoln spent his childhood on his father’s farm, where he helped out and also discovered his love of wrestling. Lincoln was a skilled wrestler; at one point in his life, he even bested Illinois’ heavyweight champion.

Lincoln’s massive frame made him an unsettling foe. He could easily hop into the ring and defeat his opponents by submission or knockout thanks to his long legs. In roughly 300 bouts, he lost exactly once.

Many imagine Lincoln to have had a low, booming voice, but in fact, he spoke with a high, reedy voice. But that didn’t prevent him from making convincing arguments in his speeches. Lincoln spoke at a measured pace.

It gave them time to think about it, which helped them grasp what he was saying. Journalist Horace White used the analogy of a boatswain’s whistle to describe Lincoln’s voice. This was probably because he had a bad case of laryngitis towards the end of his life.

Lincoln’s likeness has proven to be the most popular addition to Mount Rushmore. Mount Rushmore is a monument in Keystone, South Dakota, that features the likenesses of four U.S. presidents: George Washington, Thomas Jefferson, Theodore Roosevelt, and Abraham Lincoln. South Dakota State Historical Society secretary Doane Robinson came up with the concept for Mount Rushmore in 1923.

He proposed the idea of sculpting likenesses of the four presidents atop Mount Rushmore to artist and sculptor Gutzon Borglum. In 1927, Borglum began working on the project after accepting the commission. In 1941, workers finally topped off the carvings on Mount Rushmore.

6. Photographs of Lincoln and John Wilkes Booth Together at The Inauguration

The photograph is a significant artefact because it offers a rare look into Lincoln’s life. Furthermore, Lincoln’s assassin John Wilkes Booth can be seen in the photo next to the president, which adds a fascinating layer of mystery to the picture.

It is true that Abraham Lincoln’s legacy lives on in American culture. He had no formal education but managed to become a prominent politician and attorney.

Who Is Greg Grippo Dating? Information about the relationship