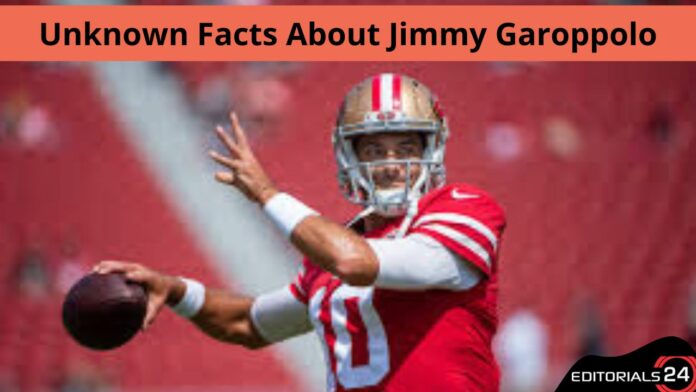 Jimmy Garoppolo, the San Francisco 49ers’ quarterback, is one of the league’s most intriguing athletes. The former backup to Tom Brady has already won two championships with the New England Patriots. The 26-year-old Garoppolo is trying to return the 49ers to their former glory when Joe Montana and Steve Young were playing quarterback in the Bay Area thanks to his lucrative new contract. The story of Garoppolo’s remarkable rise is intriguing.

Here are five interesting details about the man sporting the arms worth a million dollars and the megawatt smile:

1. Was Raised in The Suburbs of Chicago and Attended Eastern Illinois

The Chicago Town of Arlington Heights, Illinois, Where Running Back Walter Payton of The Bears Grew up And Was Known for His Off-Season Hill Runs, Is Where Garoppolo Was Raised. Tony and Denise Garoppolo Have Four Kids, with Garoppolo Being the Third. His Mother, a Polish Chef, Fed Her Growing Boys Local Favourites Including Chicago-Style Deep Dish Pizza, Which Is Now a Garoppolo Favourite. His Father Is an Italian Mechanic.

Garoppolo Was Not Heavily Recruited and Went to Eastern Illinois University, Where Former Cowboys Quarterback Tony Romo and Super Bowl-Winning Nfl Coach Mike Shanahan and Sean Payton Are Among the Alumni. in Order to Win the Walter Payton Award, Which Is Presented to The Best FCS Offensive Player in The Country, Garoppolo Passed for 5,050 Yards and 53 Touchdowns as A Senior. 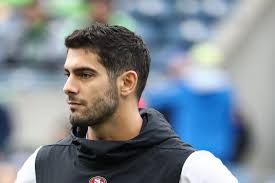 2. Entering the 2018 Season as An Unbeaten Starting Nfl Quarterback for The Patriots and The 49ers

Garoppolo Has Produced Eye-Popping Figures Since Being Selected with The No. 62 Overall Choice in The 2014 Nfl Draft, Although in A Small Sample Size. the 6’2″, 225-Pound Quarterback Has a Passer Rating of 99.7 After Completing 67.3 Percent (183 of 272) of His Passes for 2,250 Yards, 12 Touchdowns, and 5 Interceptions. Most Impressively, Garoppolo Enters the 2018 Season with A Perfect 7-0 Record as The Starting Quarterback.

He Went 2-0 Filling in For a Suspended Brady with The Patriots Last Year and 5-0 with The 49ers, Winning Games Against Three Playoff Teams in The Titans, Jaguars, and the Rams. Since Ben Roethlisberger of The Steelers in 2004, Garoppolo Is the Only Quarterback in The Nfl to Begin His Career 7-0.

Despite Not Having the Track Record of A Franchise Quarterback, Garoppolo Signed a Five-Year, $137.5 Million Contract with San Francisco This Offseason. Garoppolo Will Be Paid $27.5 Million Each Season, the Largest Yearly Compensation in Nfl History at The Time of The Contract Because Head Coach Kyle Shanahan and General Manager John Lynch Are so Confident in His Potential. 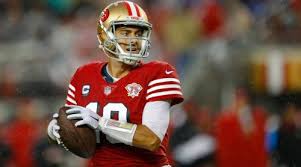 4. Is Single and Available to Date

This Offseason, Tmz Has Been Following Garoppolo Closely. They Caught the 26-Year-Old Making out With an Unnamed Blonde on The Sidewalk Outside a Nightclub in San Jose and Dining at Avra in Beverly Hills with Adult Film Star Kiara Mia. at A 49ers Media Conference, Garoppolo Remarked, “life Is Different Now.

“I’m Being Examined Closely.” Garoppolo and Instagram Model Alexandra King from The Boston Area Had Previously Been Linked. However, It Appears that Mrs. Garoppolo Is Still Missing, Which Should Lead to A Lot of Nameplates on Personalised 49ers Jerseys This Season.

Due to His Model Good Looks and Preference for Fashionable Outfits, Jimmy Gq Garroppolo Has Earned 779.5k Instagram Followers Despite Having Made Less than 100 Posts as Of the Start of The Nfl Training Camp.

Nevertheless, His Instagram Pictures Are Consistently Popular, with Images of 50 Cent in A Club, Tom Brady at The Kentucky Derby, Clutching the Vince Lombardi Trophy, and Shirtless by The Pool. He Is “just Livin’ Life One Day at A Time,” as Jimmy Gq Puts It. Every Touchdown Pass Garoppolo Throws and Social Media Update He Makes from This Point Forward Should Cause the Internet to Swoon in Unison. 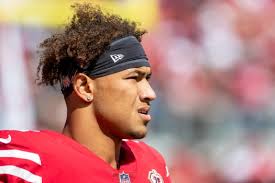 Read more: 18 Things You Might Not Know About the Real Dj Khaled.!

6. Jimmy Garoppolo Has Served as A Backup Quarterback at All Football Levels.

He Rose to Fame by Filling in For One of His Heroes, the Legendary Tom Brady and Excelling when Brady Was Suspended or Otherwise Unable to Play. Garoppolo Was Able to Flourish Despite the Challenges of Being a Backup Because He Had Done so At Every Level of Football.

He Started as A Running Back Rather than A Quarterback in Junior High. when One of His Teammates Got Hurt, His Coaches Decided to Give Him a Shot After Noticing how Strong His Arm Was. He Was Excellent in The Game and Played Quarterback for 19 Games in His Junior and Senior Years.

Jimmy G. Found Himself in A Similar Situation in Both College and The Nfl, Receiving One of His Chances During the Infamous “deflate-gate” Affair that Resulted in The Suspension of His Team’s Starting Quarterback, Tom Brady.

None of His Family Members Had Ever Travelled to New York Prior to Being Drafted. His Older Brother Described the Nfl Draft Experience, Saying that No One in The Family Had Ever Gone to New York Before, Not Even Their Parents.

For the Entire Family, Experiencing the City for The First Time and Getting to Interact with Some of The Top Personalities in The Industry Was an Amazing and Strange Experience. 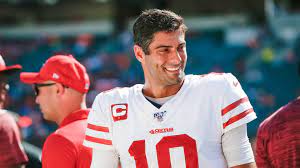 8. While Growing Up, Jimmy Garoppolo Participated in Basketball, Baseball, and Soccer.

He Didn’t Always Play Football when He Was Younger. He Played Baseball, Basketball, and Soccer While Growing up In Arlington Heights, a Suburb of Chicago. He Played Baseball and Soccer, but His Parents Banned Him from Playing Football, Which He Was Always Interested In.

He continued to Play and Test the Limits Due to His Rebellious and Competitive Attitude. for Instance, He Would Bring a Football to His Soccer Session so That He Could Play with It.

He Quickly Became Weary of Pitching in High School Baseball, but He Still Wanted to Throw a Ball. He Finally Became Involved in Football Due to His Passion for It.

9. Bob Spoo Was a Factor in Jimmy Garoppolo’s Decision to Play for Eastern Illinois.

He Received Offers from Several Colleges, Including Scholarships from Illinois State and Montana State when It Came Time to Make His Final College Choice. After Being Pleased by Head Coach Bob Spoo and Offensive Coordinator Roy Wittke During His Weekend Recruiting Visit, He Ultimately Verbally Committed to The Eastern Illinois University Panthers. 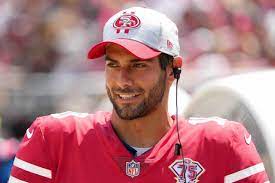 10. Jimmy Has a Discreet Love Life.

Jimmy Garoppolo, a Quarterback, Has Previously Been Associated with Boston Model Alexandra King, a Relationship he vehemently disputed despite images of the two sharing intimate moments. She gained notoriety in 2018 when, following his apparent breakup with King, she appeared to celebrate his season-ending ACL injury with a cryptic Instagram post that contained the word “Karma.”