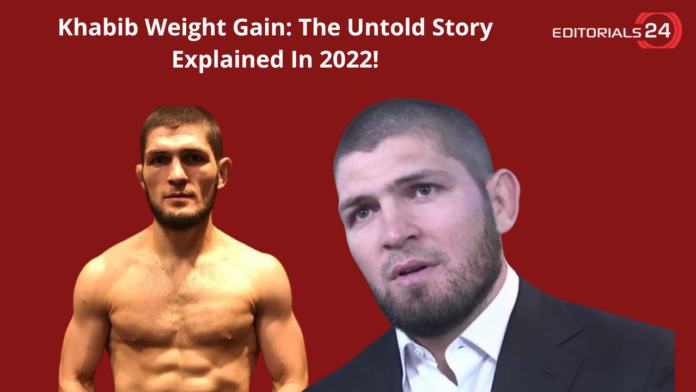 Khabib is the current lightweight champion of the UFC and a professional mixed martial artist from Russia. He has so far been among the most prosperous MMA competitors. He is currently a member of the Ultimate Fighting Championship (UFC), where he is dominating the ring with victories one after the other.

Khabib is among the most dominant athletes the UFC has ever produced in a very long time. Khabib, who hails from a small Russian hamlet, has had many ups and downs along his remarkable career.

After defeating Justin Gaethje by submission at UFC 254 in October 2020, just a few months after the passing of his father and hero, Khabib Nurmagomedov (@khabib nurmagomedov), the fighter startled everyone by announcing his retirement.

When he announced his retirement from the sport, he still held the best record with 29 games played, 29 wins, and 0 losses. He was also one game away from breaking the record with 30 victories. Dana White, the president of the UFC, did everything in his power to persuade Khabib to come back for one final fight, but nothing even came close to working.

Even after retiring, the martial artist continued to work in the industry. Even though he isn’t in the octagon winning matches and setting records anymore, he won’t avoid it. He now assumed responsibility for overseeing the combatants within the octagon.

He is now in a totally different situation, and a lot has changed in the past two years since he announced his resignation. Though Khabib must be less concerned to make the cut for the lightweight class because he is no longer the fighter he once was in terms of training, staying in shape, and especially managing weight.

That’s exactly what happened, as can be seen from current events. He became less concerned with all of these issues and is no longer the 155-pound lightweight champion. 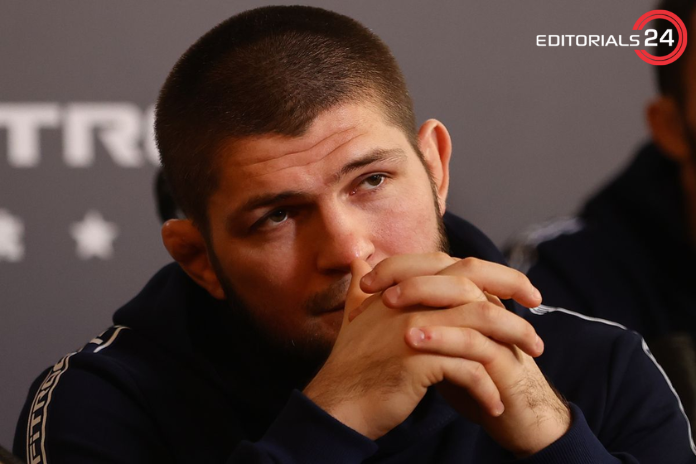 Recently, Khabib supported Islam Makhachev, the top lightweight in the world, who he is currently coaching, at UFC Vegas 49. In his fight with veteran Bobby Green, Islam was able to prevent Green from extending his UFC winning streak to ten matches.

It was a little bit of a quick contest that ended after one round. There wasn’t much place for trash-talking, so it’s fair to say that it happened afterward and by the losing party. It was directed not at the opponent but at the opponent’s coach and for their weight as if it were important to the coach in any way.

Nobody knows why, but it’s possible that after Bobby lost the battle, resentment showed, and he used words as a weapon. Alternatively, it’s possible that he didn’t mean to offend, and he was just angry that Bobby’s winning streak had come to an end.

However, as Bobby left the MMA that evening, he made sure to point out to him Khabib’s significant weight gain since his retirement.

According to Nurmagomedov’s statement to ESPN following the bout, Green approached him too closely and asked, “Hey, you was lightweight?

According to reports, Khabib, who had left the ring two years prior and was exempt from the lightweight weight requirement, was beyond Green’s comprehension as to how he could be overweight.

Read more: Cecily Strong Weight Gain: Is She Pregnant or Not in 2022?

Because they are not required to maintain a particular weight after retirement, it is possible that some people put on weight. This never occurred to Green. But it’s possible that he was joking and making innocent comments without intending to offend. And it’s possible that the remark was made in jest. Let’s proceed cautiously in that situation.

It was a fairly awful serve, though, if Green had intended for it to upset Khabib, as it failed to elicit a response from him and missed its target. The little conversation Khabib had with Green that evening didn’t seem to bother him too much.

The former lightweight champion claimed that since he had stopped fighting two years prior, he was no longer required to be a lightweight. Even Makachev had made fun of his trainer’s weight gain during a TV segment, with Kamaru Usman, the reigning welterweight champion, joking that if Nurmagomedov were to make a comeback, he would do it at 170 pounds, making him Kamaru’s division rather than lightweight as he used to be.

The UFC fighter has clearly put on weight in other instances as well. After retiring, Nurmagomedov became weary of having to evade questions about his weight in every interview. When asked if he was at his maximum weight right now, he was obliged to retell the tale of how he gained weight in 2017 after having back surgery.

Nurmagomedov was unable to lift weights or run for around five to six months. He put on a lot of weight as a result. He weighed 203 pounds when he was granted a fight on August 31 and had reduced that to 155 by December 29.