Editorials 24
HomeTechnologyHow to Use Widgetsmith on Your iPhone? Complete Details Are Here!
Technology

How to Use Widgetsmith on Your iPhone? Complete Details Are Here! 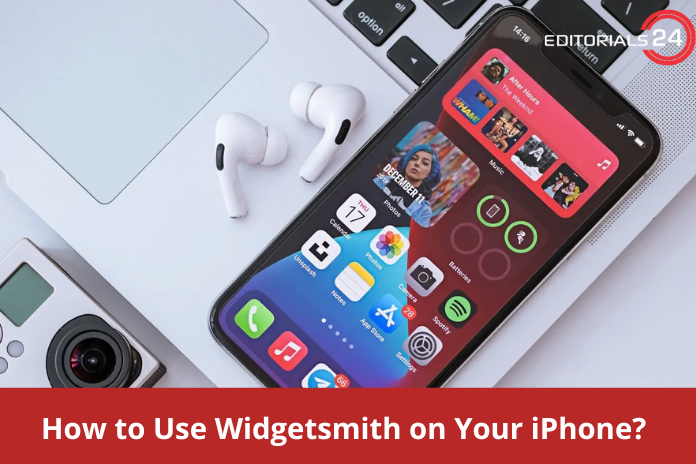 Apple started allowing users to add widgets to the iPhone Home Screen with iOS 14. Widgetsmith is one of the widget programs that became popular at the time and soon gained popularity among users.

You may add a variety of widgets to the Home Screen, including the time, date, photographs, calendar, weather, astronomy, health, tides, reminders, custom text, and even empty space. We demonstrate how to utilize Widgetsmith on an iPhone running iOS 14, iOS 15, or a later version in this lesson.

To acquire Widgetsmith for free, go to the App Store and do the following:

1) When you launch Widgetsmith, you’ll see:

Square is a small widget that occupies the same space as four app icons.

Square is a large widget that occupies the same space as 16 app icons.

Select the widget size that you prefer.

2) The Style screen will then be displayed. Photos, Time, Date, Weather, Step Counting, Health & Activity, Battery, Calendar, Reminders, Tides, and Astronomy are just a few of the categories available here. You have a variety of widget choices under the categories. Select whichever you prefer.

3) To customize the widget’s appearance, tap Aesthetic/Theme after selecting the widget style. Select a solution from the list. To add even more customization, select Customize Theme.

4) Additional customization options can be available, depending on the widget design. You can choose the desired album or photo filter, for instance, if you choose Photos in Album style. You can modify the location and time formats if you chose the Sun Rise/Set widget.

There aren’t any more options available after choosing a theme if you went with something basic, like a monthly calendar.

5) To finish configuring your widget, press Back in the upper-left corner of the screen.

6) A preview of your widget will appear. To rename it, tap from the top. When placing the widget on the Home Screen, this name will make it easier to recognize it.

7) Widgetsmith’s Add a Timed Widget feature enables you to include widgets that update automatically. Details are provided below. However, you don’t have to utilize timed widgets if you want a widget that only does one task.

How to Add a Widgetsmith Widget on The Home Screen of An iPhone? 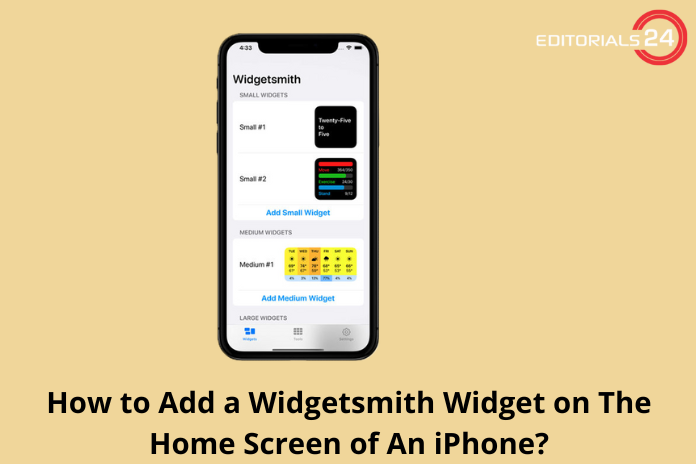 Once you have designed and customized a small, medium, or big widget inside the Widgetsmith program, adhere to these steps:

1) Navigate to the iPhone Home Screen where the widget should be added. It’s fantastic if there is empty space on the Home Screen. If it is already filled with app icons, installing the widget will make some apps migrate to the following Home Screen.

2) Tap any open space on the Home Screen. When all of the apps begin to tremble, tap the + sign in the top left corner.

3) Scroll down to Widgetsmith, which is the last widget displayed.

4) Select a widget size: Small, Medium, or Large, then press Add Widget. This will depend on the widget you made previously in the app.

5) Click Done when the Widgetsmith widget has been added to the Home Screen.

6) Your widget ought to appear. If not, select Edit Widget by pressing (not tapping) the Widgetsmith widget.

7) Click the Small #number or the name of your widget next to Widget. Select the widget that you designed in Widgetsmith.

8) To return to the Home Screen, tap anywhere outside the widget.

The set widget is now being displayed flawlessly on the iPhone Home Screen via the Widgetsmith widget. It may be moved around and placed in different places, just like any iOS widget.

Read more: Find My Device: What It Is and How to Use It?

When you’ve made two or more widgets using the Widgetsmith app, you can set them up on the Home Screen as different widgets or edit the current widget and select a different one.

Press the Widgetsmith widget, select Edit Widget, tap the blue widget name, select one of your many widgets, and then tap outside the widget area to return to the Home Screen with the new widget active.

What are Widgetsmith’s timed widgets, and how do I utilize them?

Once steps 1 through 5 have been completed, the widget preview screen will appear. You can choose to Add a Timed Widget in Widgetsmith from this menu.

You can add up to 12 distinct timed widgets, and they will change automatically throughout the day. For instance, you can set the widget to automatically modify and display your upcoming calendar events from 8 AM to 10 AM, your step count from 6 AM to 8 AM, reminders from 10 AM to 12 PM, and so on. You see what I mean.

If used properly, Widgetsmith’s Timed Widget is a brilliant idea. You only need one widget that can cycle between different widgets throughout the day, providing you with the pertinent information, as opposed to having many widgets on your Home Screen.

The Timed Widget from Widgetsmith can be compared to Apple’s Smart Stack widget, which automatically switches between widgets to provide the most pertinent information throughout the day.

To set up and use Timed Widgets in Widgetsmith, follow these steps:

1) Select a widget in Widgetsmith by tapping Add Small, Medium, or Large Widget. When you’re done styling it, tap Back.

3) To add a timed widget, tap the inconspicuous blue addition sign inside the clock.

4) At this point, tap the widget to style and modify it. Once finished, tap Back. Repeating steps 2 and 3 will allow you to add more widgets.

5) Click and drag the dark grey area to reposition this time slot.

6) A timed widget displays for two hours by default. Drag one of the lines to the left or right to shorten (to a minimum of one hour) or lengthen (to a maximum of 23 hours) the time that the widget will be visible.

7) Tap a widget and then the trash icon to remove it from the timed widget.

8) When you’re finished, select Save to save the timed widget. After that, proceed as usual to add it to your iPhone’s home screen.

How to Remove a Widget from Widgetsmith? 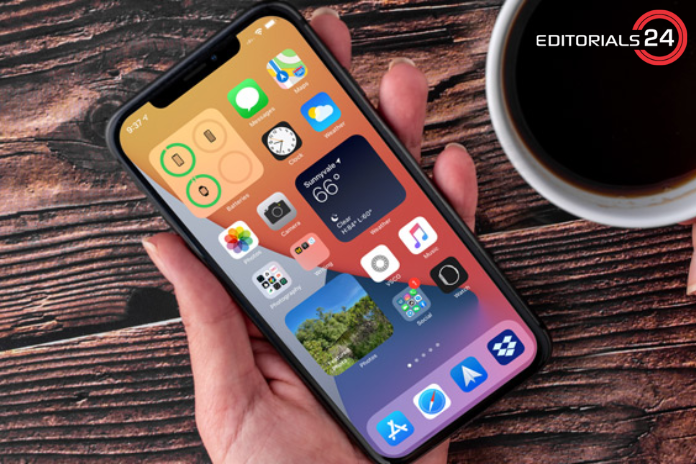 Read more: Mobdro: How To Download Mobdro App In 2022?

How to Repair Widgetsmith on I Phone Not Working?

If Widgetsmith isn’t functioning on your iPhone and displays a black screen rather than a widget, follow these fixes:

Find My Device: What It Is and How to Use It?