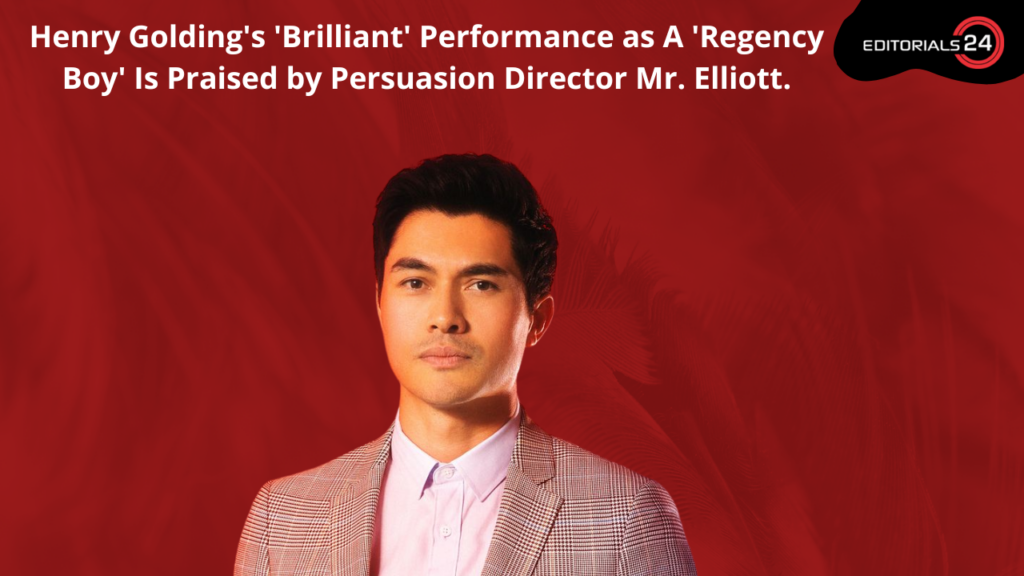 Henry Golding, who plays William Elliot in Netflix’s version of Jane Austen’s Persuasion alongside Dakota Johnson and Cosmo Jarvis, stated, “I could simply have fun with that.”

In his most recent role, Henry Golding has finished being Mr. Nice Guy.

The 35-year-old actor described his method for playing William Elliot in an interview with Town & Country, adding that he “could just have fun” with the role in Netflix’s version of Jane Austen’s Persuasion.

When there have already been so many various interpretations of Elliot, it’s really about sticking to our script and bringing a viewpoint to the table. That made it simpler for me to enjoy myself while portraying such a vibrant character on TV,” Golding remarked.

Carrie Cracknell, the director of Persuasion, clarified Golding’s “amazing” perspective on the role, which led her to choose the Crazy Rich Asians star.

She remembered thinking, “I just felt that Henry had this great blend of charisma, knowledge, confidence, and wit, which felt so novel for a Jane Austen story.” In our insightful talk, he expressed enthusiasm for the prospect of playing Mr. Elliot.

He called the character a “Regency f—boy,” which I thought was hilarious. The 42-year-old Cracknell remarked, “There was also something about Henry’s confidence and his sharp wit that felt like he could make Mr. Elliot a true contender.

Golding co-stars in Cracknell’s Persuasion, a film adaptation of Austen’s final completed book, which was released in 1817, together with Dakota Johnson and Cosmo Jarvis. Richard E. Grant, Nikki Amuka-Bird, and Suki Waterhouse are also featured in the movie.

The Malaysian-born actor gushed about having the opportunity to portray the frank opportunist Mr. Elliot, who isn’t afraid to try to woo his distant cousin Anne (Johnson) or announce his plans to acquire the family riches.

Golding said, “I think he’s a lot less complicated than we would imagine he is. He is one of those individuals who has a clear vision and plans to shape the universe to suit his needs.

He has a purpose in the story, and he will stop at nothing to achieve it or to get into the trousers of his prospective target. Even though the guy goes through a lot, it made me happy to know that he won’t end up with a woman. With it, I could just have fun.