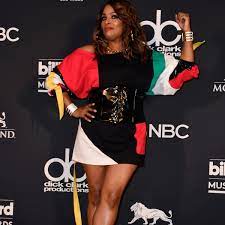 Salt-N-Pepa has been treasured by listeners for over 30 years, beginning as a trio and becoming female pioneers in the hip-hop business. What about their third member, DJ Spinderella, who is frequently overlooked? Salt-N-Pepa has had a lot of success, but it’s also had a lot of drama.

Before we see the new Lifetime biopic “Salt-N-Pepa,” which premieres on January 23 at 8 p.m. EST, let’s take a look at why DJ Spinderella left the group and where she is now.

The breakup and reformation of Salt-N-Pepa

Up until 2001, it appeared that Salt-N-Pepa were a powerful group of sisters with minimal evidence of severe problems since members Cheryl ‘Salt’ James and Sandra ‘Pepa’ Denton added DJ Spinderella (Deidra Roper) in 1986. They had five critically praised studio albums by that time, including the 5x platinum ‘Very Necessary’ and their iconic first album ‘Hot, Cool & Vicious.’

Salt left the group in 2001 because she had had enough of the music industry and didn’t want to be a part of it. The group formally disbanded the next year.

Salt later announced that she would be releasing a solo debut album, however, it was never released. Meanwhile, Spinderella became a radio personality on KKBT 100.3 and co-hosted ‘The Backspin’ (with DJ Mo’Dav), a nationally syndicated weekly hip hop music show. She also worked as a DJ in a number of clubs.

The trio reunited in 2006 to perform on VH-1’s ‘Hip Hop Honors’ program, their first performance together in six years. It was also their first time performing ‘Whatta Man’ with En Vogue on stage. The trio had already appeared on Hip Hop Honors as awardees together a year before. Then, in 2007, Salt-N-Pepa announced their reunion. For a total of five years, the trio was split up.

Read more: Why did Deavan and Jihoon break up? Complete Info in 2022!

What was the reason for DJ Spinderella’s defection?

The band would go on to travel and perform together in the future, but things have become hot since then. Spinderella, it turns out, didn’t really want to leave the group. The deejay finally spoke up in early 2019 and revealed that she had been sacked by the band.

“Despite my participation in promoting the tour [the ‘Mixtape’ tour with New Kids on the Block] and being extensively recognized as one of the performers, I received a ‘termination’ notice from #SaltnPepa in January 2019 barring me from performances with the group,” she wrote in a lengthy message to her followers.

She went on to argue that her bandmates suppressed the news of her dismissal from the general public, saying, “Following that decision, I expected them to take responsibility for informing the public and other parties affected. There hasn’t been any mention in months.”

Additionally, she stated, “I’ve taken it upon myself to inform everyone because I care about my followers and want to maintain a high degree of professionalism. I refuse to be a part of deceiving fans, ticketholders, and anyone who was hoping to witness the iconic #SaltnPepa and #Spinderella trio based on all of the promotion. So that’s what I’m doing now.”

Spinderella was plainly upset about being thrown out after decades of involvement, and it resulted in a messy lawsuit. According to Billboard, DJ Spinderella sued her former Salt-N-Pepa colleagues in October, seeking royalties and compensation dating back to the group’s 1999 ‘Best Of’ album.

She’s suing for fraud, trademark infringement, and breach of contract, with a restraining order thrown in for good measure. Spinderella has also barred the duo from using her name and image in any future event advertising.

Is she still alive?

Even though there are few specifics about the lawsuit as of 2021, Spinderella continues to keep followers up to date on social media with her personal and professional life.

According to the event’s YouTube bio, DJ Spinderella appeared as a special guest on a Sunday Brunch presented by The Sip on January 17 to discuss “heritage, history, and future hopes over beverages.”

Spinderella had previously performed with a group of deejays at a fundraiser for Gary Chambers Jr.

Her personal life is centered on her family, which includes her daughter Christy, who is married to NBA basketball player Kenny Anderson. Quinton Coleman, a comedian, is her current boyfriend.