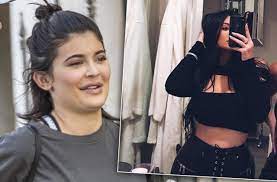 Kylie Jenner is an American media personality, socialite, model, and entrepreneur who rose to prominence in 2007 as a cast member of the E! reality television series Keeping Up with the Kardashians.

She developed a business empire that took over the cosmetic industry and made her a millionaire, according to Forbes, though they later withdrew that remark. Kylie Cosmetics is her firm, which she established and owns. She is the most-followed woman on Instagram and the second-most-followed person overall.

Kylie Jenner, being one of America’s most famous people, is rarely off the news, and she is this time due to her weight increase. When she reported that she had gained 60 pounds in an Instagram story, she sparked debate regarding her weight increase.

Keeping Up With The Kardashians’ Kylie Jenner’s Weight Gain After her second pregnancy, Star has already lost 40 pounds!

People are praising Kylie Jenner (@kyliejenner) for showing off her stretch marks and the extra weight of 60 pounds on her postpartum body and giving a glimpse of a genuine body, while others are criticizing Kylie Jenner for being deceptive in her weight gain pictures.

The reality star recently flaunted her physique by posing in a bikini for a photo she shared on Instagram while on vacation to highlight how she had already recovered from her pregnancy weight gain.

This follows her Met Gala 2022 incident, in which she dressed a wedding gown to the gala with a baseball helmet that she wore backward underneath the veil.

Kylie Jenner gave birth to her second kid, a son, in February and has been mostly out of the public spotlight since then, avoiding anyone wanting to check her body for signs of weight gain.

The Met Gala 2022 was the first high-profile event where she appeared following the pregnancy and, as a result, weight gain.

Kylie Jenner had gone forth to discuss about her weight gain just days before the Met Gala 2022 when she revealed in a short boomerang clip that she had gained 60 pounds with her second pregnancy with her baby. It was apparently more than the weight increase she had after her daughter Stormi Webster’s first pregnancy.

Not only did she make claims about her 60-pound weight increase in the video, but she also updated her fans on the weight-loss journey she had already started. She disclosed that she was on her way to shedding all of the weight, as she had already lost two-thirds of it and was down to 40 pounds.

She also claimed that walking/pilates was her favorite combination in the black-and-white clip she filmed from above as she stared down at her legs on a treadmill while getting back to her fitness regimen. She seemed as if she wanted everyone to know that she had already lost weight.

Kylie Jenner attended the Met Gala 2022 shortly after, when she may have planned to display her 40-pound weight loss. Not that the flowy bridal gown she wore was appropriate for flaunting her weight loss. Instead, she was harassed for the following few days because of her dress. Then she shifted the focus away from that terrible clothing and toward her new physique after losing weight and gaining weight.

Kylie Jenner’s weight gain, which she had previously reported, became the topic of conversation once more. Despite the fact that she did not reveal her diet or meal plans, and all she said about her training routine and workouts was that she was walking and doing pilates, she did say she was trying to be healthy and patient.

But as soon as the public’s focus returned to her weight gain post, they remembered how, just two months after giving birth to her baby, she had ‘bragged’ about how her abs were trying to make a comeback.

People didn’t like how she photoshops her physique to an eerie perfection and then claims credit for being honest and showing off her genuine body after talking about her weight gain. She has already recovered from a weight gain in such a short period of time.

Regarding the cosmetic mogul’s weight increase during her first pregnancy, she revealed that she gained 40 pounds in a Twitter Q&A session with fans before swiftly deleting the comment.