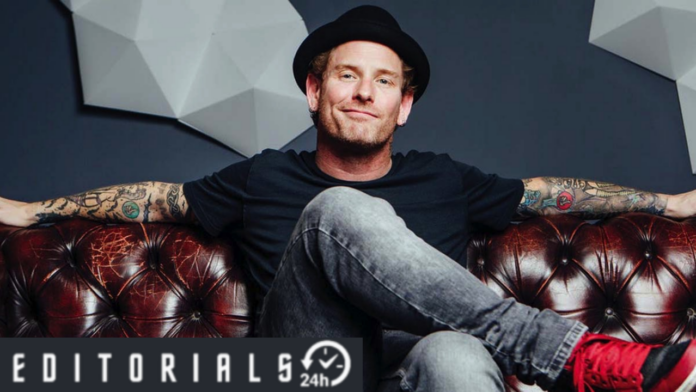 Corey Taylor is a vocalist, songwriter, and guitarist best known for his work with the rock bands Slipknot and Stone Sour, where he served as the frontman and lyricist. The net worth of Corey Taylor is $10 million.

He also has a solo career and has published novels that have become New York Times best-sellers. Taylor has also worked with Korn, Apocalyptica, Steel Panther, and Code Orange, among other bands.

Corey Taylor was born in Des Moines, Iowa, in 1973, and spent his childhood in Waterloo with his single mother.

Taylor acquired a fledgling interest in masks and horror themes after seeing the trailer for the 1978 horror film “Halloween” early on. Meanwhile, his grandmother, who showed him an Elvis Presley record collection, introduced him to rock music.

Taylor had developed a drug addiction by the age of 15 and had twice overdosed on cocaine. His grandmother, who had purchased his musical instruments, took legal care of him.

Taylor battled substance abuse and mental illness throughout his life, even attempting suicide at the age of 18.

Stone Sour was formed in 1992 by Taylor and drummer Joel Ekman. Shawn Economaki soon joined as the bassist, while Josh Rand took over as the electric guitarist. In 1993, the band released a demo album, and the following year, another.

Taylor was contacted by the metal band Slipknot as the band was producing a new demo album, prompting him to quit Stone Sour for the time being.

He returned for the group’s self-titled first album, which debuted at number 46 on the Billboard 200 in 2002.

The band’s second album, “Come What(ever) May,” arrived at number four on the Billboard 200 in 2006, and was an even bigger hit. “Audio Secrecy,” which debuted at number six on the charts four years later, was the follow-up.

Joey Jordison, Mick Thomson, and Shawn Crahan approached Taylor when he was still a member of Stone Sour in 1997 and asked him to join the band Slipknot.

He’s been the band’s permanent lead singer since the band’s second demo CD was released. Slipknot’s self-titled first album was released in 1999 and went double platinum in the United States, reaching number one on the Top Heatseekers list.

In 2001, he released “Iowa,” which debuted at number one on the UK Albums Chart and third on the US Billboard 200. “Vol. 3: (The Subliminal Verses),” released in 2004, was the group’s first album to use more conventional melodic song structures and acoustic arrangements, and it was a commercial success.

Slipknot won a Grammy Award for Best Metal Performance for the song “Before I Forget” on the album, which charted at number two on the Billboard 200.

“All Hope is Gone,” Slipknot’s first number one album on the Billboard 200 chart, was released in 2008.

It’s also the band’s last album with its original lineup. Slipknot’s subsequent albums include “.5: The Gray Chapter,” which was nominated for a Grammy Award for Best Rock Album in 2014, and “We Are Not Your Kind,” which debuted at number one on both the UK Albums Chart and the US Billboard 200 for the band’s third straight year.

Taylor has worked with a variety of musicians throughout the course of his career, including Stone Sour and Slipknot.

Steel Panther, Apocalyptica, Damageplan, and Soulfly have all featured him on their albums, and he also contributed to the all-star album “Roadrunner United.” Taylor took part in Rockfest in Des Moines in 2009 with the Junk Beer Kidnap Band.

Dum Fux and Audacious P are two more bands with whom he has shared the stage. In 2019, he collaborated on the single “Drugs” with Falling in Reverse, and he also appeared on Nostalgia Critic’s spoof album of Pink Floyd’s “The Wall.”

Taylor launched Great Big Mouth Records in 2006 as a record label as a producer. Walls of Jericho’s “Redemption” and the namesake band’s “Facecage” are both albums he produced. Taylor has a solo career, and his first solo album, “CMFT,” was published in 2020.

In addition to his music, Taylor has a flourishing literary career. He wrote a monthly column for “Rock Sound” magazine in the United Kingdom from 2001 until 2016.

“Seven Deadly Sins: Resolving the Debate Between Born Bad and Damaged Good,” his debut book, was published in 2011.

“A Funny Thing Happened on the Way to Heaven Or How I Made Peace with the Paranormal and Stigmatized Zealots and Cynics in the Process” was released in 2013.

Taylor has played himself in a number of movies, including the 2002 version of “Rollerball” and the documentary “Get Thrashed.”

In the 2014 horror film “Fear Clinic,” he played the character Bauer, which was a rare fictional part for him.

Taylor married Stephanie Luby in Las Vegas a couple of years later, but the pair divorced in 2017. Taylor married Alicia Dove in 2019 and they have two children together. Angeline, a daughter from a previous relationship, is his child.